We Adopted a Stray Fur Baby! (Plus, the winner of the “Guess the Weight of Mason’s Yard Long Bean Harvest” contest!) 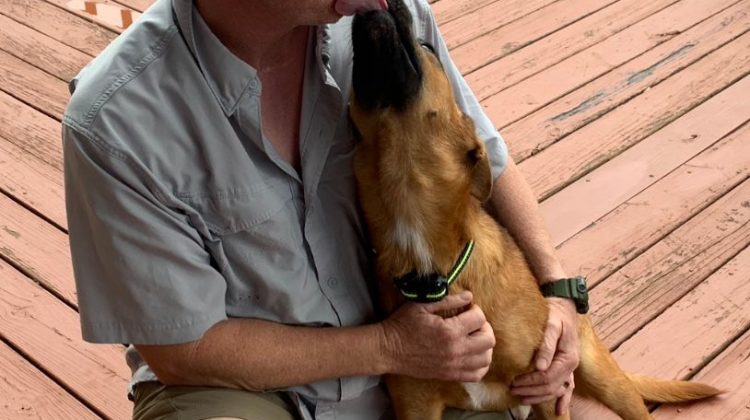 First, since I know you can’t wait one moment longer… The winner of last week’s “Guess the Weight of Mason’s Yard Long Bean Harvest” contest is Michael Solomon. The correct weight was 6.75. Michael guessed 6 lbs. 10 oz. Wow!! That was SOOOOO CLOSE! Congrats to Michael, who won a free At Your Service publishing package from BookLocker.

Okay, back to the fur baby story!!

A month or so ago, I was dropping off some seeds for my neighbor, Regina, who is participating with us in the giant pumpkin growing contest. When I opened my vehicle door, a sweet, skinny, red dog walked up to me, wagging his tail, and begging for pets. He did not look familiar. I noticed his skin and bones appearance and I felt so sorry for him! My heart melted. Then, he ran across the road to the other neighbor’s house and I thought they’d simply gotten a new dog. (And, that he needed some fattening up!)

Well, those folks were feeding and watering him, but were also asking around to see if he was lost. They even checked Facebook for lost pets in this area (which is very effective, by the way). Nobody responded about a lost pet but the neighbor said one woman, who hadn’t lost him, but wanted him, seemed a bit kooky. People trying to find homes for lost pets are occasionally approached by folks working for laboratories that do horrible things to dog.

We heard the other day that the neighbors were going to take him to the pound. I hadn’t stopped thinking about him since that one friendly encounter. He was sooooo sweet!!

So, night before last, we walked to the neighbors’ house, and told them we wanted to adopt the dog. We said we’d bring our male dog, Tank, to their house the next day for an introduction. Tank does NOT like other male dogs and this pup has not been neutered. I really didn’t think Tank would take to him but he almost immediately did! 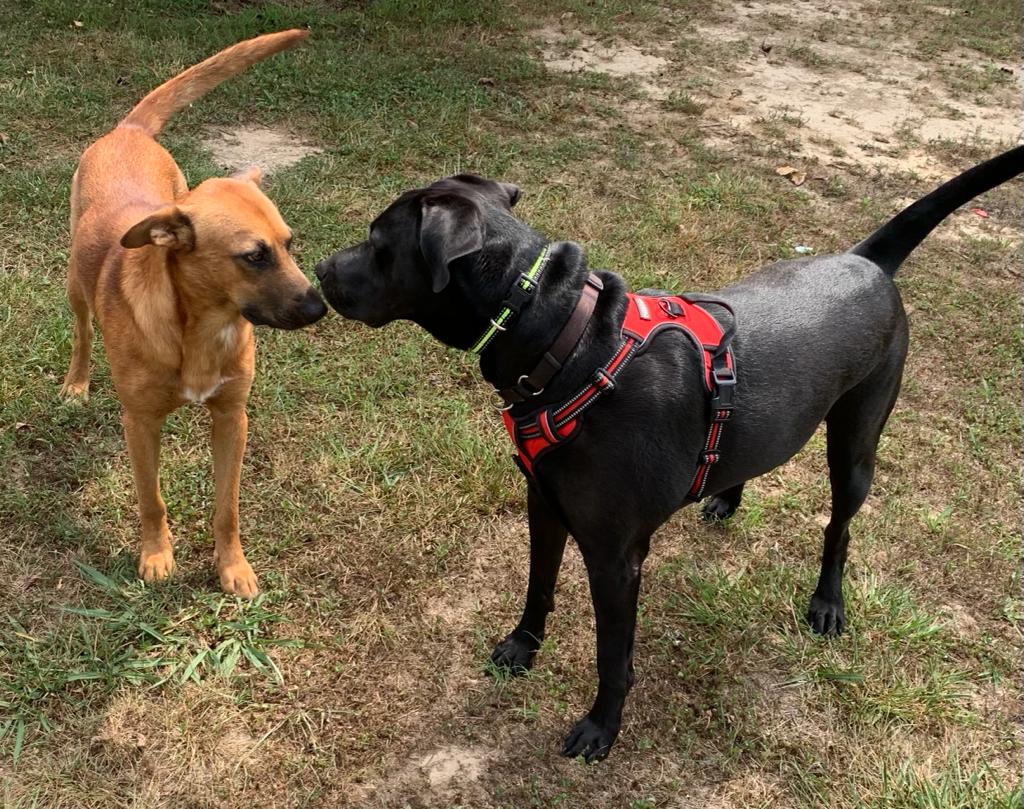 After about 30 minutes, we started to walk home and the pup followed us. Our dogs let him into our yard, and onto our front porch, and even shared a water bowl with him. We then walked around back. Of course, by then, he had a name. Red. 😉

He very warily creeped up the back porch staircase. It occurred to me that he may not have had much experience with stairs. Brian finally coaxed him all the way up. Our dogs spend a LOT of time on that porch. Aside from their crates (that hold their beds), that porch is their second most protected domain. We had no problems at all! About half an hour after that, we let our dogs and Red into the house. And, again, no problems. We gave him a much needed bowl of food for lunch, and some treats. 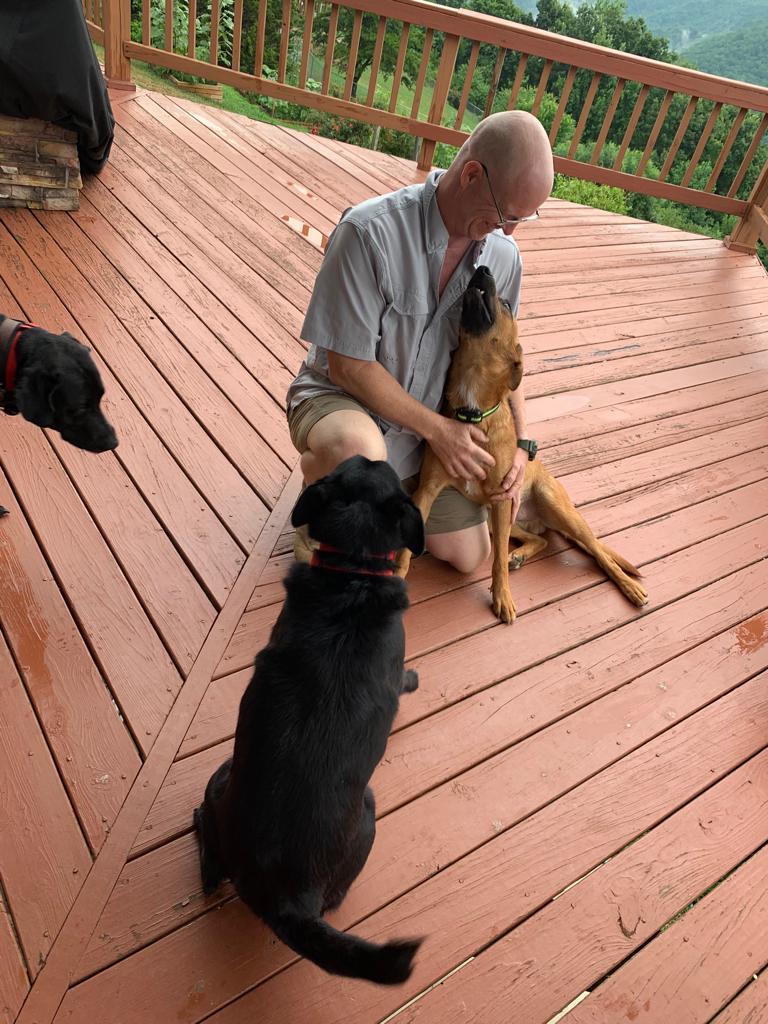 It’s been about 24 hours now. There was a HUGE storm here yesterday afternoon. Rather than Red needing to spend it outside, soaking wet in that downpour, he was curled up at the foot of our bed, snoring loudly. He ate two bowls of dog food for dinner, and sat on the porch with us, Tank, and Moon last night. Later, he got bored, and started play fighting with Tank, which was adorable. Tank LOVES to play fight!! No growls. Just grunts and barks, and lots of wrestling. Red came inside at bedtime, happy as a clam. It’s like he’s always been here! 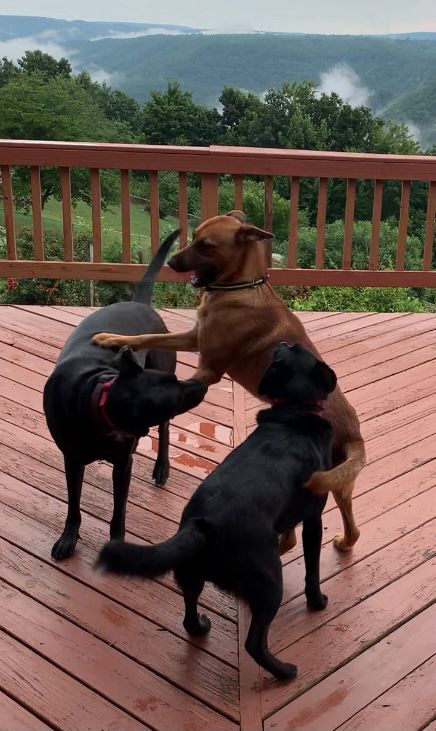 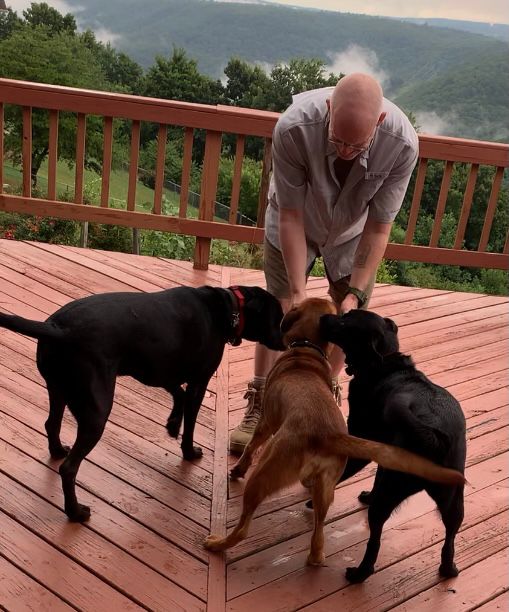 Now, we suspected at first that he was a lost puppy but now we think he was dumped. He does not know any voice commands but he is house-trained (thank the LORD!!!) and he keeps trying to jump up on our bed at bedtime, which we don’t allow because I don’t like sleeping in dog hair. Our dogs all have their own beds.

Red is currently learning how to “sit” and he’s also being trained on our perimeter fence so he’ll be safe. 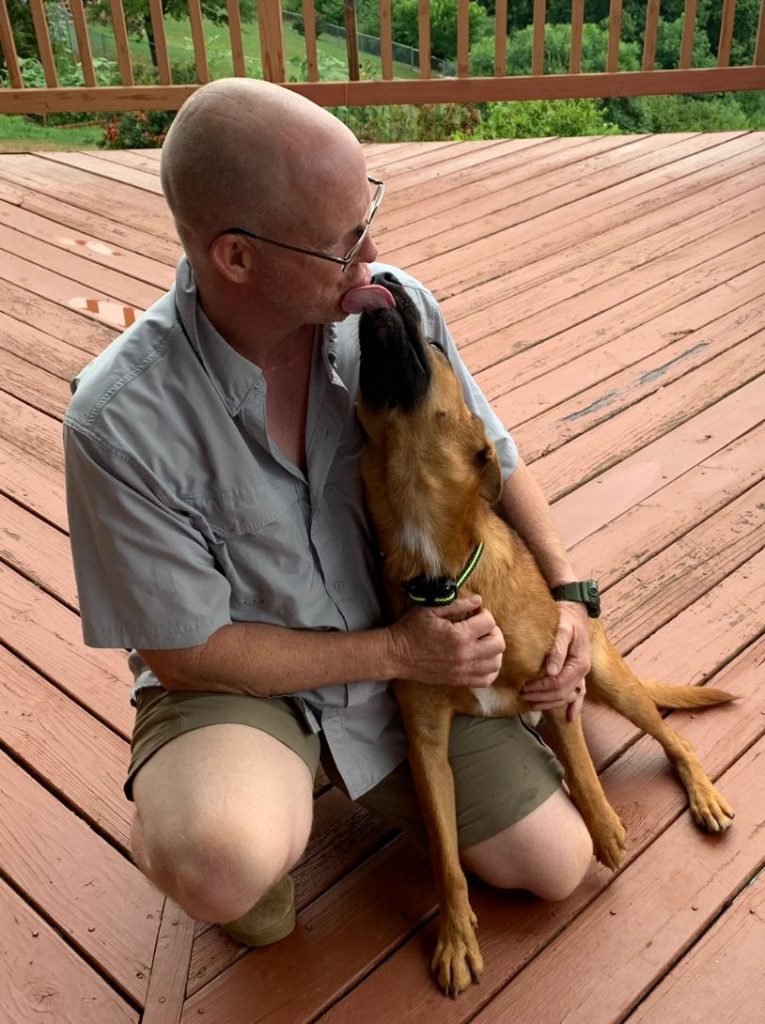 After I took that picture above, I reminded Brian, “You know he doesn’t have his shots yet, right?!?!”

On Monday, he has a vet appointment at 9:30 for a check-up and his shots. (They’re also going to see if he’s chipped, which we doubt.) And, we’re going to make an appointment to have him neutered. I hope he still loves us after that… 5 Responses to "We Adopted a Stray Fur Baby! (Plus, the winner of the “Guess the Weight of Mason’s Yard Long Bean Harvest” contest!)"

Print FriendlyAccording to Angela in last week’s issue of WritersWeekly, what happened AGAIN?! ***Please answer the trivia question using our contact form HERE. Do not post your answer in the comments section below.  You must be a WritersWeekly.com subscriber to participate in the weekly contests. Subscribe today. It’s free! NOTE: ONLY ONE WINNER PER HOUSEHOLD PER CALENDAR QUARTER, PLEASE. THIS WEEK’S PRIZE: A free print or ebook of your choice from Booklocker.com!           END_OF_DOCUMENT_TOKEN_TO_BE_REPLACED