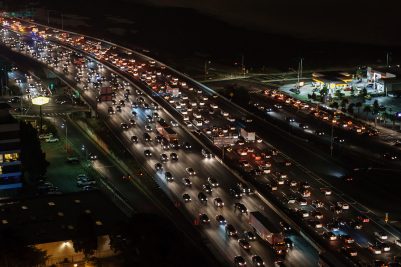 As some of you may remember, Brian and I played an epic April Fool’s Joke on our daughter. We tricked her into thinking the sellers of the house we’re buying had backed out of the deal. Brian had doctored an old email from our realtor and it looked very, very real.

And, we kept laughing about that joke until Saturday morning, when I received a REAL email from our realtor that was eerily similar to the fake one Brian had created. It was so similar, in fact, that I thought our daughter had contacted the realtor, and convinced him to help her get even with us.

However, that was not the case. That’s when we learned why we hadn’t yet received the time we were supposed to show up at the title company for the closing next Thursday.

On Friday, we spent most of the day packing for our two-week trip to Georgia – what we’re calling Move #1. This would involve all of our items in storage, seven years of business files, system back-ups, etc. You name it, we had it packed and ready.

On Saturday, we were up with the sun. We then drove to UHaul, picked up a 26′ truck, and met some muscle we’d hired at our storage facility. After about an hour of loading boxes on carts, moving them down a loooooong hallway, carefully stacking everything safely in the truck, and sweating buckets, my phone dinged.

It was the realtor, telling me that the sellers:

1. Had apparently (according to their realtor) not responded their own realtor’s  phone calls for a week (that’s why we hadn’t received a time for the closing).

The house has been under contract for 2 MONTHS!

Their realtor had stayed up all night finding rentals for them but, again, according to their realtor, the sellers didn’t like any of them. Of course, all of this was hearsay. I felt like I was playing the old children’s game of Telephone.

I’m usually a pretty cool chick under pressure. But, at that moment, I FLIPPED OUT! I sent a volley of texts back to our realtor. I told him the UHaul was already half full, we already had the utilities and Internet scheduled to switch over on Thursday, we had a cleaning crew arriving on Friday and a painting crew on Saturday, I’d already wired the down payment to the title company, and much, much more. I then wrote, “They need to GET OUT!!!”

Okay, I admit that wasn’t my finest moment. Extremely unprofessional. But, I was tired, sore, sweating, and FURIOUS!! Oddly enough, I had researched this topic about a month prior. I can’t remember why but I did (a psychic moment perhaps??). I learned that, after a seller signs a contract, they have to sell or they risk a very expensive lawsuit that they will, in almost every case, definitely lose. Furthermore, they would be responsible for our attorney’s fees, our storage and rental expenses during the legal process, and more. And, in the end, they would still have to sell us the house. I was so incensed that I was ready to start calling lawyers right then and there.

The fact is, we CAN’T stay in our current home. Our townhouse is going up for sale. Either we or they were going to be homeless and, if it was going to be us, they were sure going to end up paying for it! They’d had two months to make arrangements and the closing was 5 DAYS AWAY!

We had to keep moving forward. While the guys kept loading the UHaul, I quickly came up with a couple of contingency plans in case my idea did not work. Then, I started crafting a carefully worded email to have our realtor send to the seller’s realtor so she could send to the sellers. In it, I made a list of all of the expenses we had incurred to date, including the survey and appraisal, and the travel expenses associated with the trips we’d taken to Georgia. I spent dozens of hours submitting paperwork to the mortgage company because self-employed people are so strictly scrutinized by finance companies now (due to Covid). I’d gotten behind on my work many times. And, we spent four months searching for homes before finally finding this one, negotiating for it, and getting the contract.

Well, it appeared my strongly-worded email that did not state, but definitely implied, an expensive lawsuit worked because, as of Monday, they had found a rental, and were scheduled to be out of the house by Thursday.

We spent 24 hours IN HELL, worrying about what was going to transpire but things were looking up!

We are in Georgia right now, at our daughter’s house (she has forgiven us for the April Fool’s Joke but I expect some big-time payback next year!). Wednesday is the final walk-through and Thursday is the closing. Then, we get to start the fun job of emptying the UHaul. I was driving it today and I hit a HUGE bump! I’m pretty sure we were airborne for a second (and, I admit, that was FUN!) and I’m positive that everything inside that UHaul is now upside-down. I’d driven the truck, pulling the camper, the day before but I broke one of the sway bars (oops), which is why I was delegated to driving the UHaul today. Harrrumph…

On Saturday, we drove through a VERY bad storm, and found a hotel just as a tornado warning was issued. 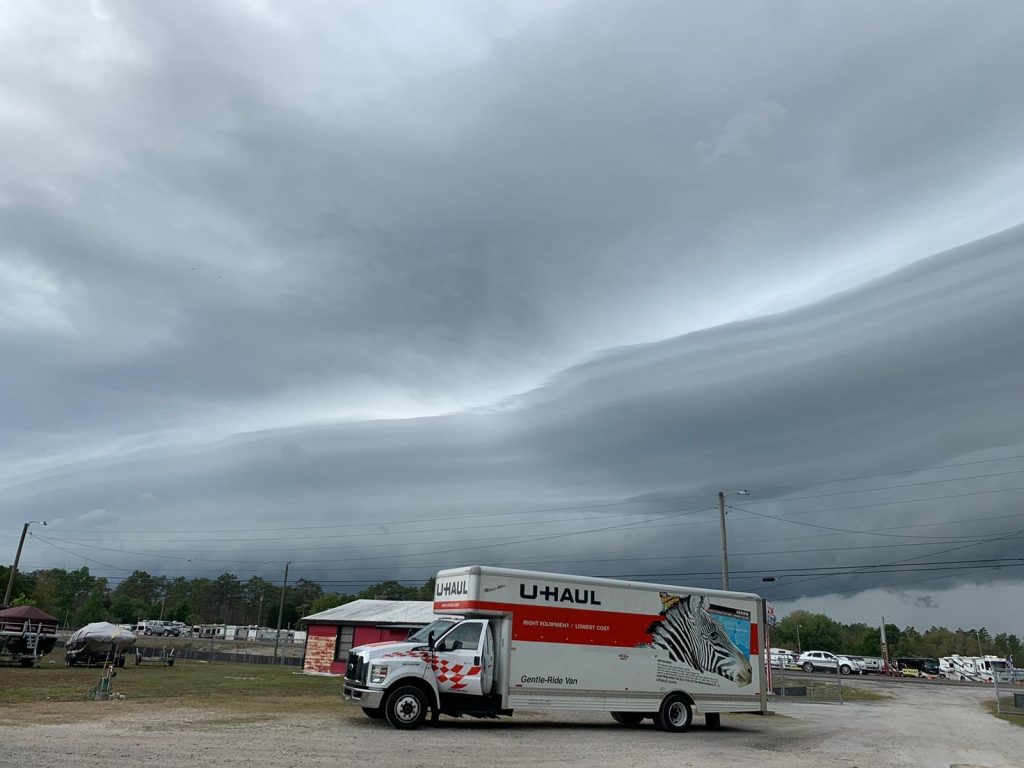 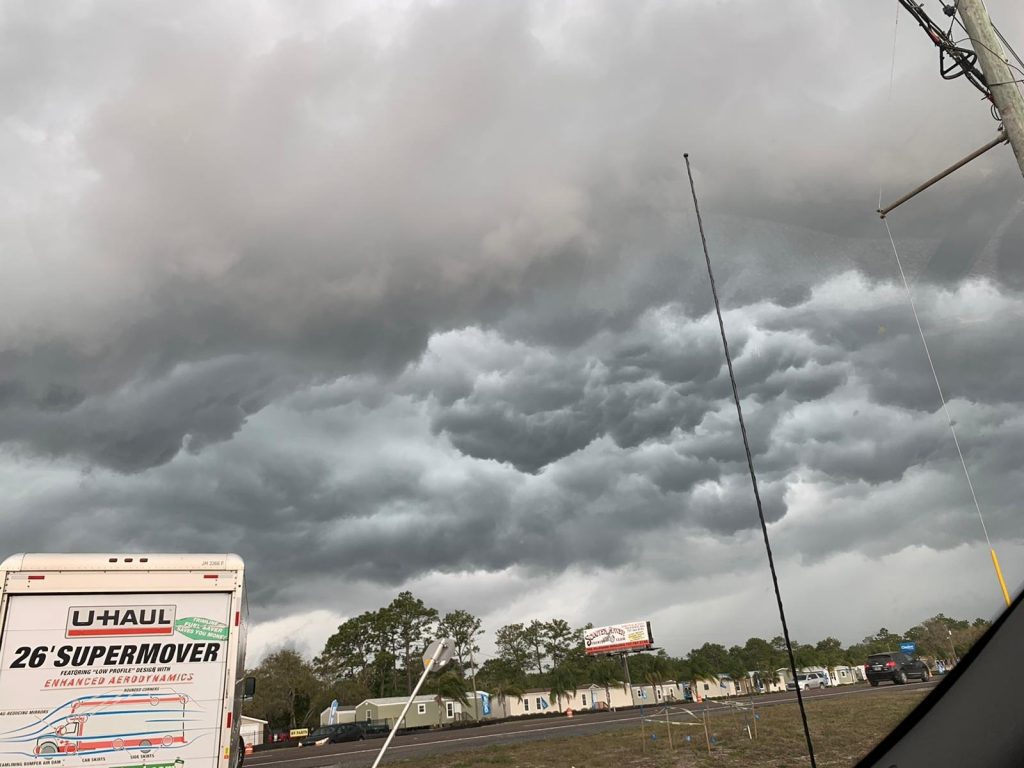 On Sunday, we had to get a late checkout because there were tornado watches and warnings all around us. 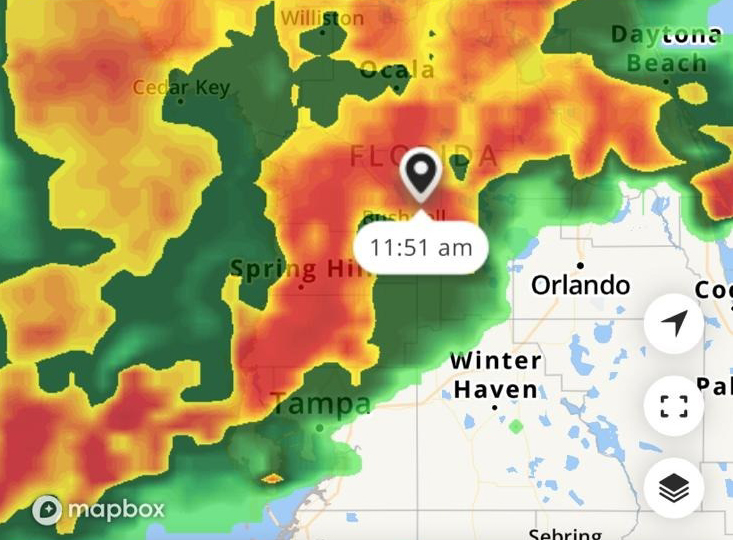 We finally escaped at 1:30 p.m. We were only supposed to drive for five hours that day, but ended up driving for 10 because we spent most miles barely moving, or sitting completely idle on the freeway. I sat on the freeway, tightly gripping the steering wheel, stewing with anger over the sellers’ delays, and how it might affect our lives over the next few months. I also did lots of praying because my heart was flippity flopping all over the place from stress.

During my stewing, we passed eight accidents (the rain had long since passed), and also realized we were on I-75 with all of the people leaving Florida at the end of Spring Break. One of the accidents was a Class A RV that had rolled, and caught on fire. We were praying for those folks, and their families, as we passed. It was horrifying!

Today, our drive from Fort Benning to Rockmart was uneventful, and absolutely beautiful! All of the flowers are blooming. We saw fields that looked like yellow carpet!

Hopefully, when I post an update next week, we’ll be IN the house, surrounded by the smell of fresh paint. After that, we’ll head back to Florida for our furniture and other belongings. And, then we’ll do it all over again, one final time, for Move #2. Can’t WAIT for that… 😉

UPDATE: I am writing this on Wednesday evening. We did the final walk-through and the sellers should be out by tonight. I’m not sure what story to believe now. Either they’ve been moving things for a couple of weeks now, or they’re the fastest packers on the face of the planet. All of the furniture was out and they only had a few odds and ends left. Even the garage was completely empty. Yea!

Our only concern now is that both of the grandbabies have a stomach bug. 🙁 If we’re going to get it, I’m praying it happens AFTER the closing tomorrow.

WE CAN’T *WAIT* TO SEE WHERE YOUR IMAGINATION TAKES US!

Print FriendlyPer last week’s issue of WritersWeekly, what is one reason a freelancer might get sued? ***Please answer the trivia question using our contact form HERE. Do not post your answer in the comments section below.  You must be a WritersWeekly.com subscriber to participate in the weekly contests. Subscribe today. It’s free! NOTE: ONLY ONE WINNER PER HOUSEHOLD PER CALENDAR QUARTER, PLEASE. THIS WEEK’S PRIZE: A free print or ebook of your choice from Booklocker.com!           END_OF_DOCUMENT_TOKEN_TO_BE_REPLACED