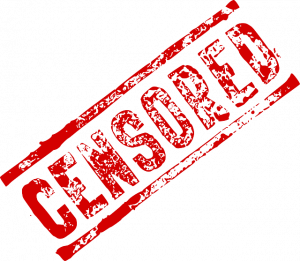 Climate change tyranny – so much for getting all sides of the story.
Reporter fired for questioning climate change
“Mish Michaels was working as a science reporter for the ‘Greater Boston’ program on WGBH, but the Boston Globe reports she was let go after having ‘questioned the evidence that human activity was causing global warming.’ ”

Publishers hire “sensitivity” censors!!
Publishers are hiring ‘sensitivity readers’ to flag potentially offensive content
“Sensitivity readers have emerged in a climate – fueled in part by social media – in which writers are under increased scrutiny for their portrayals of people from marginalized groups, especially when the author is not a part of that group.”

As a former cop – I’m on the side of the guy with the camera.
Appeals Court Says Filming The Police Is Protected By The First Amendment
“We conclude that First Amendment principles, controlling authority, and persuasive precedent demonstrate that a First Amendment right to record the police does exist, subject only to reasonable time, place, and manner restrictions.”

Why did Milo lose his book contract? You be the judge?
Simon & Schuster Cancels Milo Yiannopoulos’s Book
“The last straw may have come over the weekend when organizers of the Conservative Political Action Conference disinvited Yiannopoulos after a video interview emerged of him appearing to condone pedophilia.”

Print FriendlyAccording to last week’s issue of WritersWeekly, what percentage of consumers in 2020 claimed they’d like to see more video content from brands? ***Please answer the trivia question using our contact form HERE. Do not post your answer in the comments section below.  You must be a WritersWeekly.com subscriber to participate in the weekly contests. Subscribe today. It’s free! NOTE: ONLY ONE WINNER PER HOUSEHOLD PER CALENDAR QUARTER, PLEASE. THIS WEEK’S PRIZE: A free print or ebook of your choice from Booklocker.com!           END_OF_DOCUMENT_TOKEN_TO_BE_REPLACED