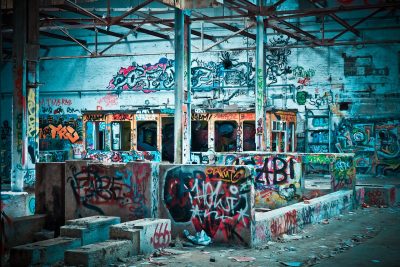 Her website says (among other things): “Like all marriages, we’ve had our ups and downs, more good times than bad. Most recently we have spent fourteen nail-biting months living in an apartment while our house was rebuilt from a house-fire.”

For some small sellers, Amazon loses its luster

“They come across as a company that is so cutthroat, like ‘We will hunt you down and find anyone who said anything bad,’ said one of the sellers.”

Did you ever think we’d be defending graffiti against “copyright infringement?”

“The once completely underground art scene is now beginning to operate more openly, making the likelihood of legal claims and litigation higher.”

What does the future hold for B&N?

“Executives were not against a sale, as long as it isn’t to Amazon, a possibility that is a long shot at best given the tumultuous history between the two companies and the chance such a deal would bring up antitrust issues.”

“The majority of the buy buttons that were won by third-party sellers, Firebrand found, were controlled by seven companies, and the average selling price for each book offered by a third-party seller was about 33% off of its price.”

“It turns out a little-known provision of federal law makes it illegal to publish a new book in the United States without providing the federal government with two free copies.”

Predatory publisher falsely lists legitamate professors on it editorial board

These Professors Don’t Work for a Predatory Publisher. It Keeps Claiming They Do.

“Tales of scholars who have been snookered by unscrupulous publishers are commonly told. But the International Journal of Humanities and Social Science has claimed another set of victims: Professors who say their names and clout have been poached.”

The Village Voice ends editorial production, lays off half of staff

“Due to the business realities, we are going to stop publishing Village Voice new material,”

THIS is what suppression of free speech looks like.

“‘Producing and distributing content that ridicules, mocks, provokes and disrupts public order, religious values and public morals through social media … will be considered a cybercrime punishable by a maximum of five years in prison and a fine of three million riyals ($800,000),’ the public prosecution tweeted late Monday.” 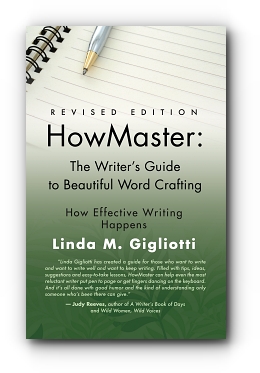 Author Linda M. Gigliotti draws from years of practice as a private
writing tutor in the guidebook that teaches writers how to format visceral
writing that pulls readers into their book. She explains with instruction
and samples of published works how to craft writing that come to life in the reader's mind.

HowMaster is a wise choice for the writer who wants to weave words around the reader’s heart.


Author Linda M. Gigliotti draws from years of practice as a private
writing tutor in the guidebook that teaches writers how to format visceral
writing that pulls readers into their book. She explains with instruction
and samples of published works how to craft writing that come to life in the reader's mind.

Print FriendlyPer last week’s issue of WritersWeekly, what is one reason a freelancer might get sued? ***Please answer the trivia question using our contact form HERE. Do not post your answer in the comments section below.  You must be a WritersWeekly.com subscriber to participate in the weekly contests. Subscribe today. It’s free! NOTE: ONLY ONE WINNER PER HOUSEHOLD PER CALENDAR QUARTER, PLEASE. THIS WEEK’S PRIZE: A free print or ebook of your choice from Booklocker.com!           END_OF_DOCUMENT_TOKEN_TO_BE_REPLACED