The Fire Department Comes for a Surprise Visit! 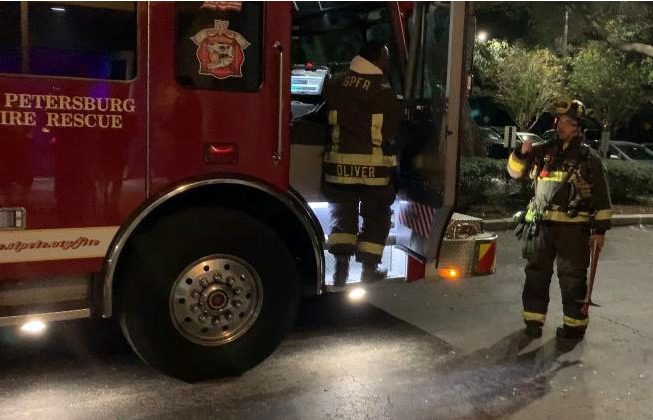 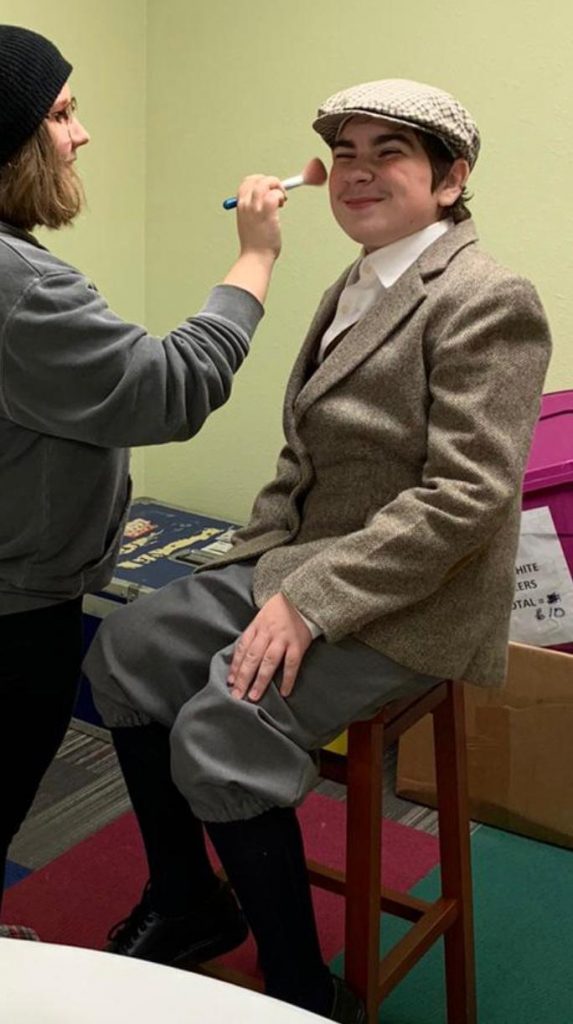 Back in August, Mason (age 13) auditioned for Faith Covenant’s 2019 Christmas Musical, A Christmas Carol. Mason has always been a ham, and is very cute with big blue eyes. At one point, he expressed an interest in acting but I never wanted him involved in an industry that is rife with drugs, and many other problems. At the time, I never thought that theater might be a good outlet for him. When auditions were announced in August for A Christmas Carol, Mason was very excited to give it a go!

He had to sing a song a capella (he had a beautiful soprano voice…at that time), and read lines. Having zero Stage Mom experience, I let him pick the song and he didn’t practice it beforehand. He chose Take On Me by A-Ha. In the end, the people there for the audition were singing with him! I did give him a bit of advice. I told him to speak his lines in a British accent and to speak VERY LOUDLY. And, he NAILED that. He was very animated and enthusiastic and I thought he had a good chance of getting a part in the play. (I later asked him how he learned to speak in that accent so well. He responded, “Downton Abbey, of course!”)

I surprised myself by deciding, last minute, to audition as well. Seriously. I was watching Mason audition and I thought, “Hey, this might be something we can do together! Great mommy and son quality time!”

I was in drama in high school, as well as choir for several years, and I was a TV reporter at one point. So, I know how to pretend I’m someone I’m not (ha ha ha). I sang Little Altar Boy (the audition was for a Christmas play, after all) a capella, and I also spoke my lines with a very LOUD British accent. I’d learned to “project” in high school. Basically, that means yelling without sounding like you’re yelling. I’ve always had a loud voice, which got me into trouble throughout school. After my audition, the director asked, “Do you have professional stage experience?”

If we didn’t get a part in the play, we wouldn’t hear back from them. They said they’d make their decision in a week. Then, Mason got a “call back,” meaning a second audition. He did great with that, too. Two weeks later, I told Mason it didn’t look like either one of us got a part because we hadn’t received a phone call. The very next day, the call came. Mason got two parts and I got four. I never thought we’d get more than one part in the play. And, since I’m horrible at memorizing lines, I started to freak out a bit. I could probably pull off one part…but four?! Mason has what we call a photographic memory. He wasn’t nervous at all. In fact, he has since memorized everyone’s lines in the entire play and, during rehearsals, was able to fill in easily for parts where the actors were absent on some days.

Turns out Mason’s parts don’t have many lines (and neither do mine, thank goodness) but he has some really funny scenes! He got the part of “Lad,” which is a naughty boy who tries to throw a snowball at Scrooge. He REALLY wanted that part. He is also “Young Scrooge.”

I got a solo (I admit my stomach did a flippity-flop when I heard that) as Snooty Lady. I also got Umbrella Woman, Mrs. Fezziwig, and The Poulterer’s wife, which is a funny part, complete with chicken feathers in my hair and a missing tooth. That is, by far, my favorite part. My co-actor (the poulterer) roared when I first donned my costume, and said, “You look so…UGLY!”

Max (age 18) has no interest in acting but he does like working behind the scenes so he volunteered to work with the set director, props, fixing smoke machines, etc. Here is Max last night at rehearsal, wearing black so people can’t see him behind the actors in dark scenes when he’s moving sets. 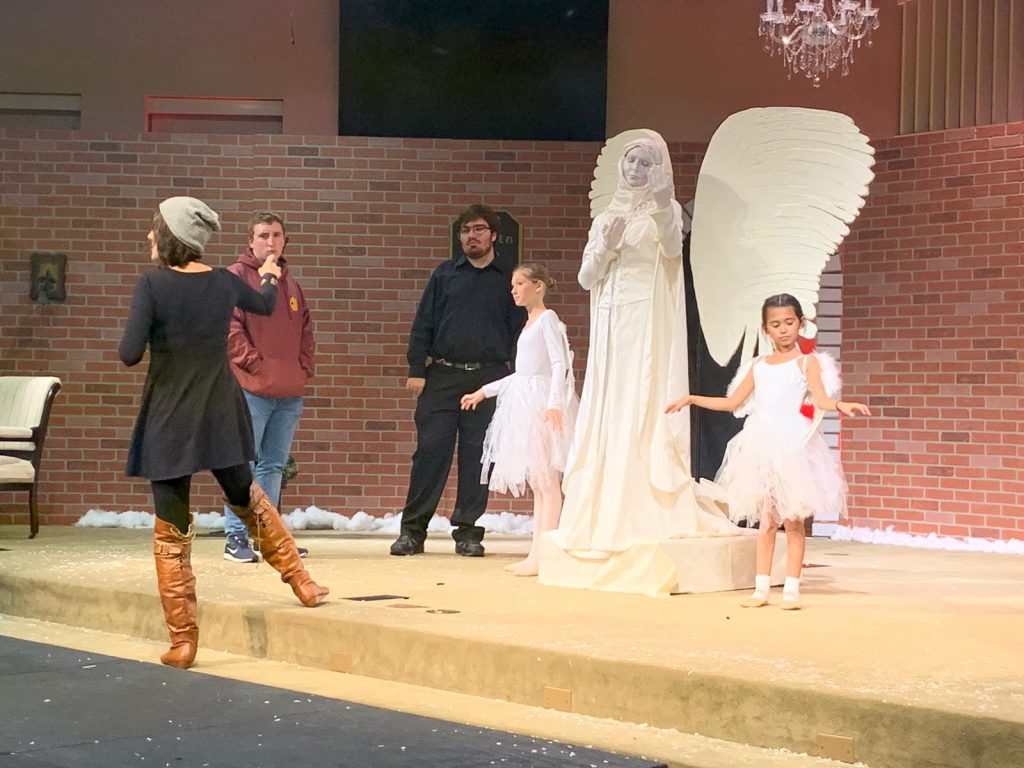 So, for the past three months, Mason, Max and I have been going to rehearsals and, recently, dress rehearsals. And, while it’s been a LOT of work, we have had a BLAST! From the beginning to end of each audition, everybody is singing and dancing, smiling and laughing, joking around, and being a big, happy, drama-filled family. Mason is HOOKED! And, so is Max!

Last night was our final dress rehearsal. They put the smoke machines in the entryway and the ballet dancers looked absolutely stunning! 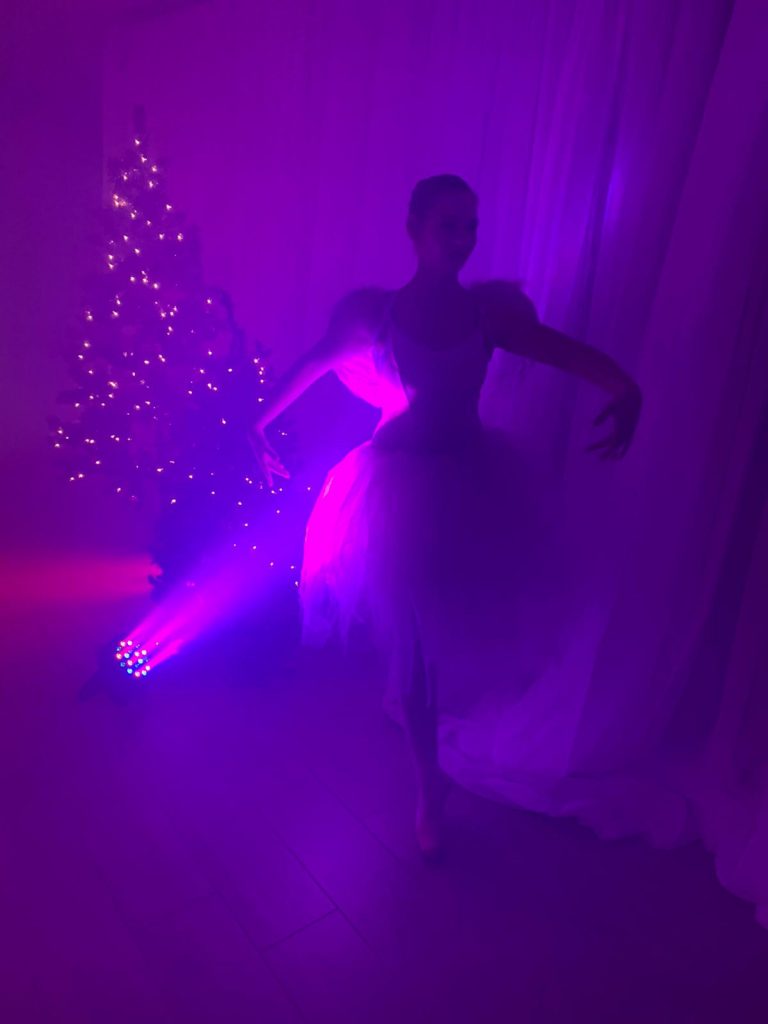 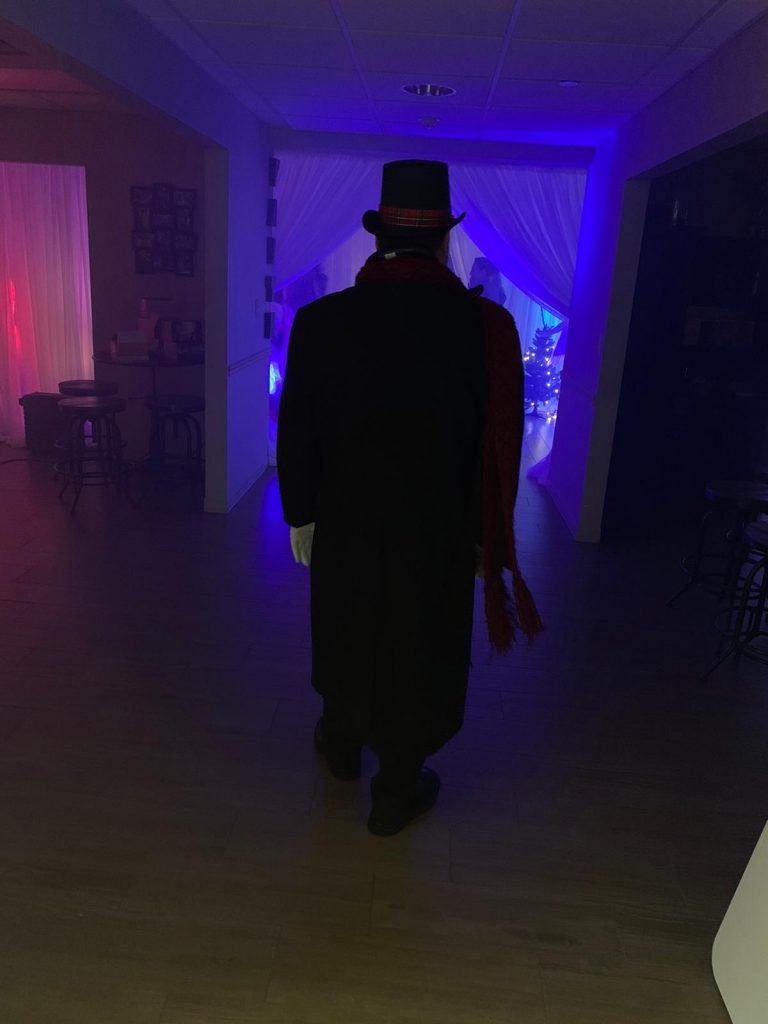 And, that’s when it happened. “BEEP! BEEP!! BEEP!! (Insert computer voice…) A FIRE HAS BEEN DETECTED. EXIT THE BUILDING.” Over and over again. The set crew scrambled to turn off the machines. Somebody called the fire department. Too late. I stepped outside to get away from the fog and I heard the sirens in the distance. And, of course, I whipped out my phone to take pictures. Turns out posting pictures of a foggy scene and fire trucks is a great way to advertise a musical! My Facebook post got lots of likes and laughs!! 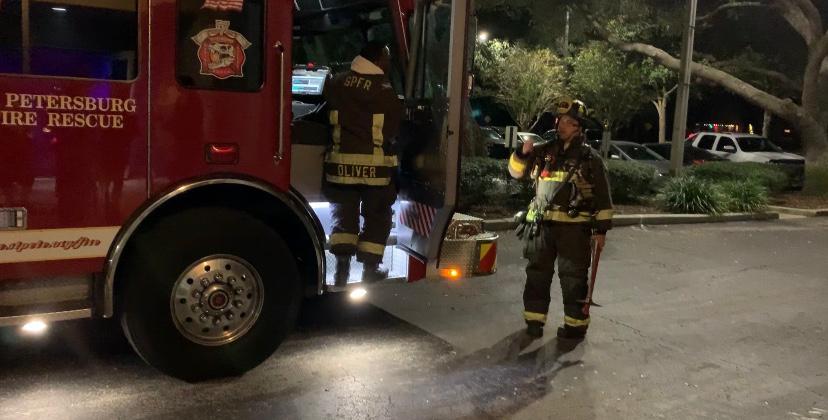 All three shows are sold out. The first one is tonight. Mason is not nervous at all. Not even a tiny bit. I think that boy was made for the stage. The director talked to me last week, and encouraged me to get him more involved in theater. She said he has “natural talent.” Her husband said Mason is the best actor he’s ever seen. That might be a stretch but he definitely has talent. So, I found a local acting school for kids. Mason is all signed up to take two classes next semester and he is auditioning for Annie next month. He is sooooo glad I found that because he was depressed that this play was coming to an end.

Max has volunteered to be involved with the set crew for that and the school said they’d love the help! I will wait until next year to be in another play because the business keeps me pretty busy. But, in the meantime, I’m very happy to be a stage mom, standing by while our enthusiastic, community-minded boys make people smile.

We’re going to see the school’s Christmas production, Elf, Jr., this Sunday. It’s a professional performance at a local theater.

So, one niggle of interest from Mason in auditioning for a play has turned into a family affair and, hopefully, several years of involvement in a community of creative, funny, talented adults and children who love making people happy. 🙂

Your Book As a Movie? Watch Out for Snake Oil Salesmen!

Joel's BookProgram: The Simple Secret To Writing A Non-Fiction Book In 30 Days, At 1 Hour A Day! - SECOND EDITION 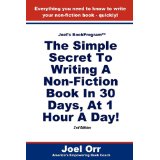 If you are a solo professional, having your own book is one of the best investments of time and money you can make, to promote your business and gain more clients. Why?


Order "The Simple Secret To Writing A Non-Fiction Book In 30 Days, At 1 Hour A Day!" right away. And picture yourself handing your own book to a prospect, in just a short time!

4 Responses to "The Fire Department Comes for a Surprise Visit!"

Print FriendlyPer last week’s issue of WritersWeekly, when Angela found the unique carrot, what did she suggest to the pastor? ***Please answer the trivia question using our contact form HERE. Do not post your answer in the comments section below.  You must be a WritersWeekly.com subscriber to participate in the weekly contests. Subscribe today. It’s free! NOTE: ONLY ONE WINNER PER HOUSEHOLD PER CALENDAR QUARTER, PLEASE. THIS WEEK’S PRIZE: A free print or ebook of your choice from Booklocker.com!           END_OF_DOCUMENT_TOKEN_TO_BE_REPLACED