I Caught a Shark! A SHARK!! 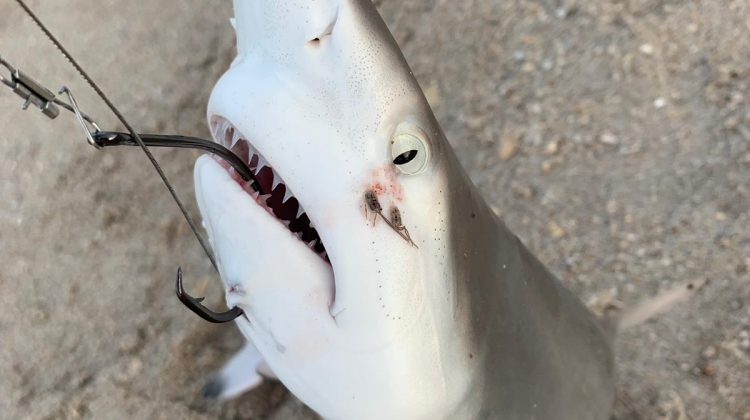 I have been fishing on the beach numerous times in my life. And, while I have caught countless fish from boats and piers, and while two of our kiddos have IGFA Junior World Records (that have since been broken), I have never managed to hook a fish from the beach. Not once in my entire life. UNTIL NOW!!

Armed with some dead fish from the bait shop, hearty lines, heavy weights, and all that other fun stuff, I walked into the ocean to cast, got walloped by a wave, got bumped by a fish (which made me yelp and dance an embarrassing jig for a second), got my line pretty far out, kept the bail open while walking back, closed the bail, put my pole in the pole holder, and plopped down on my lawn chair. And, I watched…

It only took about 30 minutes for the pole to bend over. Yep, that was no wave! I jumped to the pole holder, grabbed the pole, set the hook, and started reeling. People stopped to stare. I reeled while relaxing the pole forward, stopped, pulled the pole back against the invisible adversary, and did the same thing over and over. He ran once. I could tell it was big! He was a fighter! Oh, MAN! I was SO EXCITED!!! Was this the trophy fish I’d been dreaming about my entire life? Would I be able to land him all by myself?! How many dinners would this monster make?! Whoo HOOO!!!

I finally got him up on the sand and…this was his actual size: 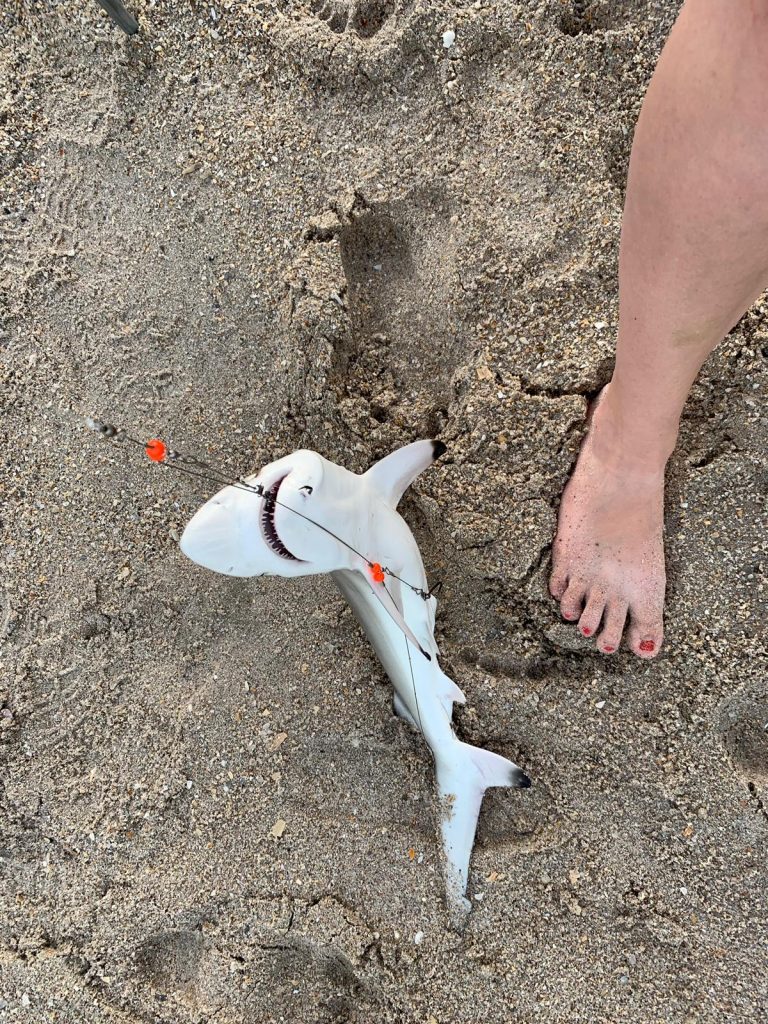 I got the hook out, put him back in the water, and sent that cute baby blacktip on his way while humming the Baby Shark song. I didn’t catch any more sharks but I did catch two saltwater catfish (we call those hardheads). But, I didn’t care. I just wanted to catch fish, no matter what kind. I got to talk to people passing by, including a couple from Illinois. I got to watch for sea turtles (didn’t see any of those). I watched a ghost crab repeatedly tossing sand out of his hole. And, I got to commune with God for awhile, staring out at his massive, brilliant beauty as the galaxy became more vivid and bright from that darkening stretch of sand.

I spent the rest of my sitting time (waiting for the pole to bend) by re-applying insect repellent countless times. Each time I had to go into the water to cast (getting slammed by waves), I had to spray myself all over again. The no-see-ums were having a field day with me. I must be very tasty. I literally have hundreds of bites on my ankles, legs, and arms. I woke up scratching like crazy this morning but I didn’t care because I CAUGHT FISH ON THE BEACH FOR THE FIRST TIME!!!

Print FriendlyPer last week’s issue of WritersWeekly, what is one reason a freelancer might get sued? ***Please answer the trivia question using our contact form HERE. Do not post your answer in the comments section below.  You must be a WritersWeekly.com subscriber to participate in the weekly contests. Subscribe today. It’s free! NOTE: ONLY ONE WINNER PER HOUSEHOLD PER CALENDAR QUARTER, PLEASE. THIS WEEK’S PRIZE: A free print or ebook of your choice from Booklocker.com!           END_OF_DOCUMENT_TOKEN_TO_BE_REPLACED