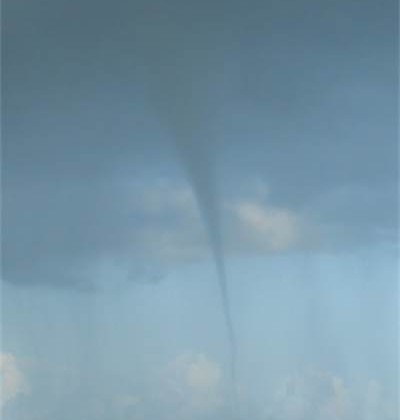 On vacation last week, we had quite a thrill! As we were driving to dinner in Saddleback Key on our last night there, I was looking out the window and I couldn’t believe my eyes! There was a waterspout! Right there in front of us!!! I got extremely excited, and asked my father-in-law to pull over. He did, but seemed a bit annoyed when I almost jumped out of the moving vehicle. I took a couple of pictures but we were not close enough so I hopped back in, and asked him to turn right. It was a ritzy neighborhood and all the homes were located on the water. We found an empty house (under construction) and I once again jumped out of the car with Max (age 11) close on my heels.

We ducked under the construction tape, and raced to the water. There in front of us was one of the most beautiful sights I have ever seen with my own eyes! It lasted for several minutes, and kept building, and dying, and then building again. It lasted so long that I was able to point at different parts of it, and explain to Max how they form, build, and die. It was really awesome watching the long, white funnel with the water spinning under it, and they would eventually meet, and then part, and then meet again. We were so in awe of God’s power and beauty!!

We were not afraid. It was pretty far off in the distance and we had an unobstructed view. Locals were stopping, too, so I knew we weren’t in danger. We would never put our children in harm’s way and we have always taught them to respect and appreciate nature’s power and beauty.

The others stayed in the car where they had a pretty good view, too. I think they were concerned about trespassing. I definitely was NOT! We took videos and pictures, and then just stood there, gazing at the miracle in front of us. It started to rain a bit so Max and I backed up against the wall of the house to shield ourselves. That’s when I realized that the waterspout appeared to be slowly heading in our direction. I glanced at nearby trees and, sure enough, their branches were bowing south. We were facing the waterspout (north) and the wind was blowing right in our faces. Yes, it was definitely time to go!

We raced through the rain back to the car, and drove around the corner (only about a tenth of a mile) to Kaya Island Eats, where we had reservations. It was on stilts. Probably not the best place to ride out a waterspout but they weren’t evacuating or anything so I figured the management knew what they were doing. South Florida is the waterspout capital of the world. Florida Bay gets 500 of them a year!

The people inside were all up from their tables, looking out the windows. A second waterspout had formed on the other side of the restaurant. The manager, a very friendly gentleman, opened a sliding glass door, and let me take Max and Mason out on the porch so they could get a better look. It was closer than the first, but moving away from us.

I was dumbfounded with awe. Seriously. I know it sounds silly but it took me hours to calm down after the adrenaline injection of that experience!! I never felt like we were in any danger at all. I only felt blessed to be able to experience that natural wonder. The only other waterspout I’ve ever seen was about 25 years ago on Galveston Bay and it was far away, and much more difficult to see. I kept telling the boys how special this was, and how they may never see another one in their entire lives.

The second waterspout quickly dissipated so we finally sat down to order. I told the manager about the one coming from the other direction. He said they usually fizzle out when they hit land. We’d parked under the restaurant (stilts, remember?) and I jokingly asked him where the door to the basement was.

He kept looking out the windows, saying he’d let “our little storm chasers” (Max and Mason) know if another one came down. He said he and his friends saw a dozen one day, over a period of an hour and a half, near that spot. Wow!!!

The first waterspout we saw never did hit land. Soon after the second one disappeared, the skies opened up and it poured outside, lashing the small restaurant. Lightning flashed simultaneously with a deafening thunder clap and we had to scrape Mason (age 7) off the ceiling. We all had a good jump at that one!!

Today, I wanted to share these pictures with you all. The last one was pulled from a video my mother-in-law took from the car. You can see Max there on the left, watching in wonder. I was so mesmerized that I failed to take pictures of the boys with the waterspout in the background! Ug!!