Rear-Ended by Leadfoot Leona in Alabama! 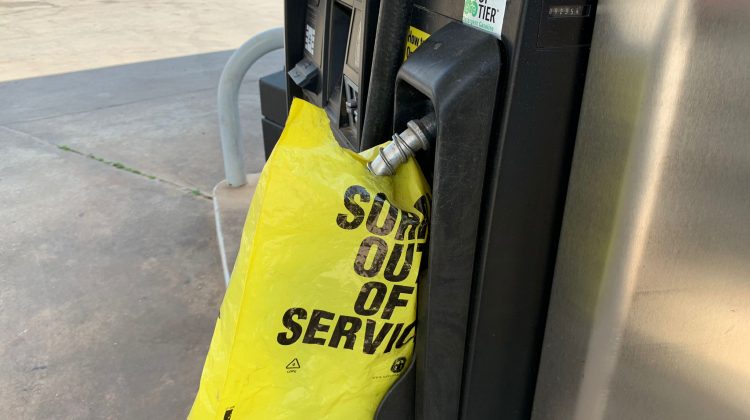 We’d finally done it! The movers were huffing and puffing, packing all of our stuff into the second (and final) UHaul. With Tetris-like precision, they managed to fit all of our furniture and other stuff in – with plenty of room to spare! By 1:00 p.m. that afternoon, we were FINALLY on the road.

We had to make a pitstop in Lecanto, Florida to pick up Brian’s camouflaged hunting camper. I was then driving the F-150, and towing the camper. Mason was riding with me. I was very happy I wasn’t stuck in a bouncing UHaul.

We drove for another few hours, and stopped for the night. We didn’t see any fuel shortages in Florida. The next morning, after fueling up, we were back on the road. Once we were in Georgia, we stopped for gas at a station that had a $30 limit, and only one type of fuel. 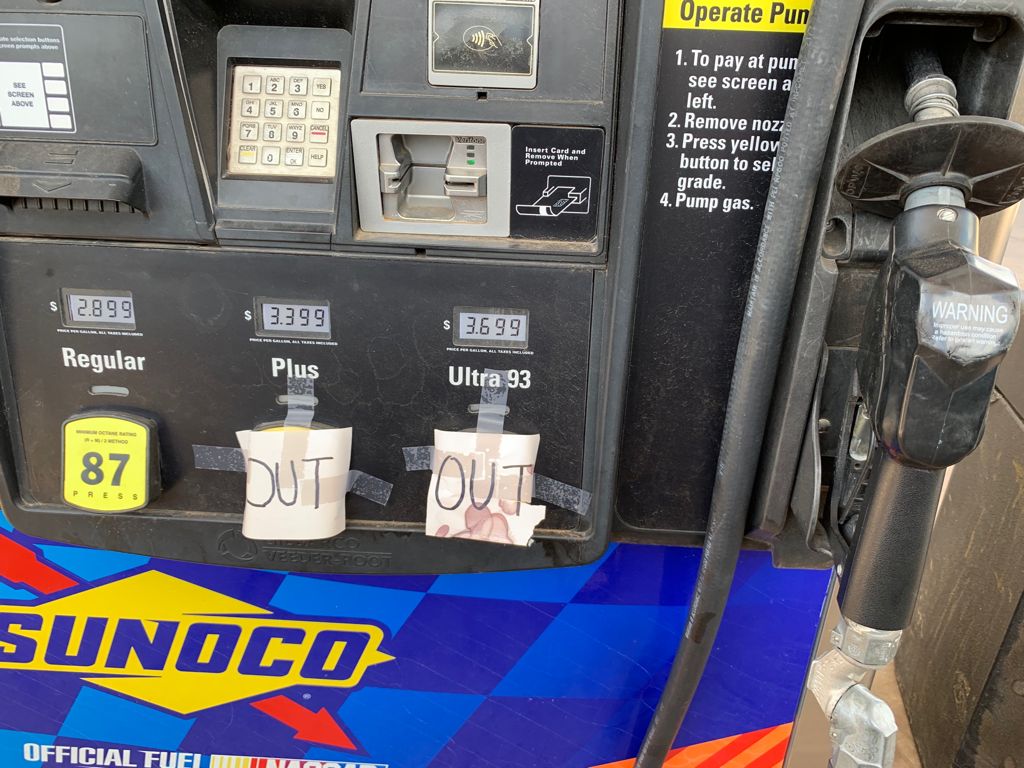 We saw another station with no gas a few miles down the road. 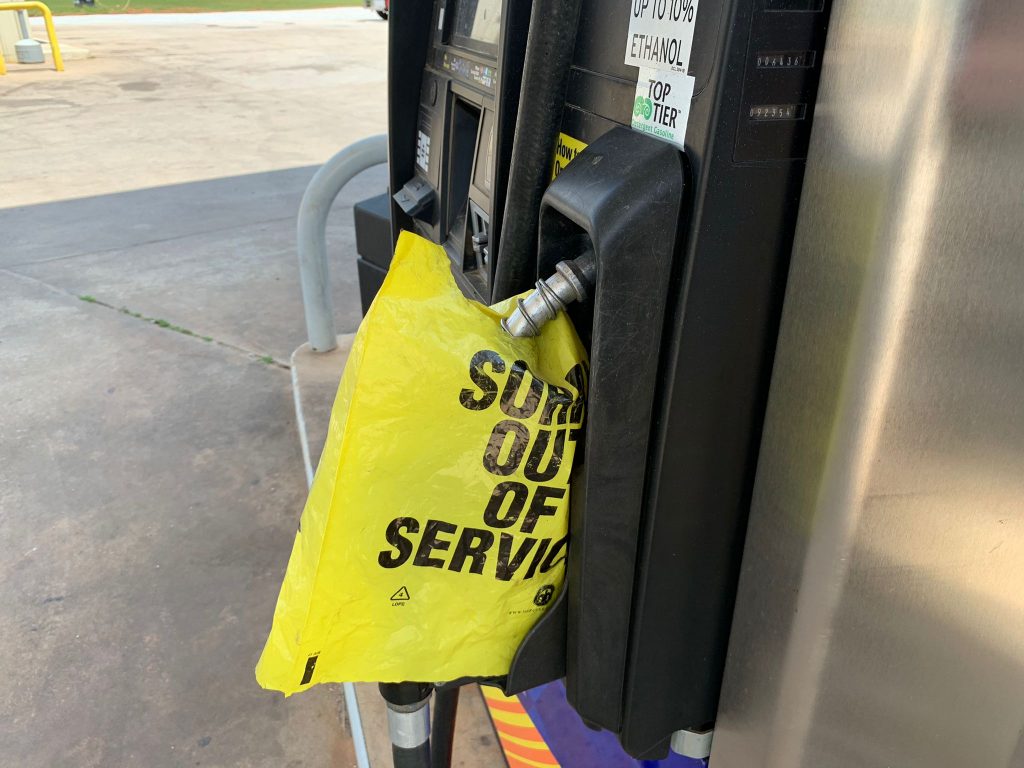 But, the large stations on the major roads seemed to have plenty.

We’d chosen to take the backroads, getting out of Georgia as quickly as we could by heading West into Alabama, which was reported to have better fuel supplies. WRONG. We saw plenty of pieces of white paper taped to pumps there, too. But, we were able to find gas every time we needed it. Rather than stop at another hotel, we decided in the afternoon to just keep on going because the GPS said we’d be at the house by 6:00 p.m. YEA!!!

And, that’s when it happened…

We were at a pretty congested intersection in Alabama, trying to turn right. Brian was in the UHaul ahead of me. He was able to turn. Lots more traffic was coming so I radioed him that I’d catch up when I could. I sat there waiting and waiting…and more cars kept coming.

He’d never been in a car accident before and I’m pretty sure he’ll never forget it.

I decided not to admonish him for the profanity, and instead calmly said, “We just got hit. Don’t worry. It’s just a fender bender. We need to pull over, and exchange information with the other driver.”

There was a very large shoulder next to me so I drove onto that, leaving enough room for the person behind me to pull over as well. I radioed Brian again. “I just got rear-ended. Pull over somewhere and I’ll take care of this. Shouldn’t take long.”

I grabbed my license, handed Mason the ham radio mike in case Brian had any questions, and asked him to dig around for the insurance in the glove box. I then stepped out of the truck and that’s when I noticed that the truck that hit me was trying to go around me.

I jumped into the road in front of it, waving my arms, and yelling, “OH NO NO NO NO NO! You are NOT LEAVING!!”

She waved, and then slowly went around me, pulling onto the shoulder in front of me. Another woman pulled over as well, saying she’d witnessed it. She wrote down her name and number, gave those to me, and left the scene. That was so nice of her!!

I walked up to the passenger side of Leadfoot Leona’s BIG black truck as she was rolling down the window. She was quite distraught, and kept saying over and over, “This is my husband’s truck! He’s going to KILL ME! KILL ME!!”

I replied, “Look, lady, I am NOT mad at you. I’ve hit far more people than have hit me. Let’s just exchange information, and get back on the road, okay?”

She got out. We looked at the front of her truck. There was a dent right on the middle front of the bumper. 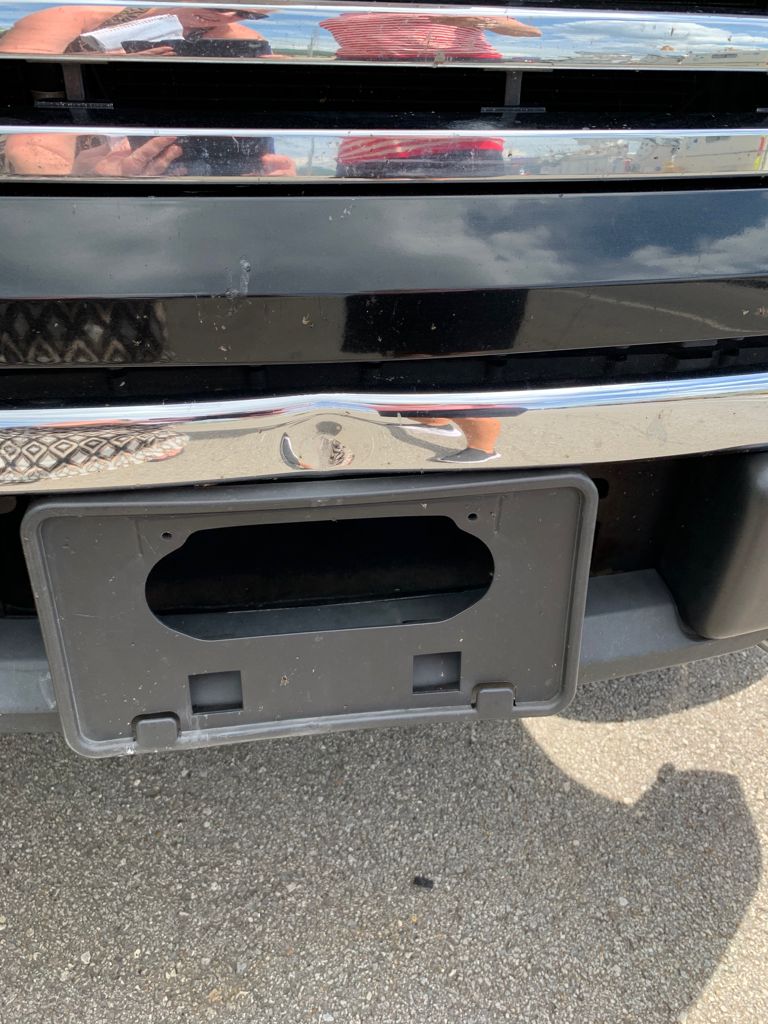 We walked back to the rear of the trailer. I looked and looked at the middle part, and couldn’t find any dents. I told her we could exchange info. and that I’d let her know if we found any damage later.

We took pictures of each others’ licenses and insurance and she kept going on and on about her husband killing her. I wanted to say, “Geez, lady, if he’s that bad, divorce the (bleep)!” But, I just tried to keep her calm.

After we were finished, I noticed the traffic was WAY worse from the rubberneckers. I figured the police would be there soon so I said, “You don’t wanna hang around and wait for the cops, do ya?” She shook her head no. I said, “Let’s get outta here then.”

I shook her hand, told her it was nice to meet her, but not under these circumstance, and said I’d call her that night.

Mason and I pulled into the traffic, and caught up with Brian, who had pulled over about a half mile ahead. I pulled in behind him. He got out of the UHaul, and looked at the back of the trailer. He found the dent. It was on the left side of the camouflaged rear door. 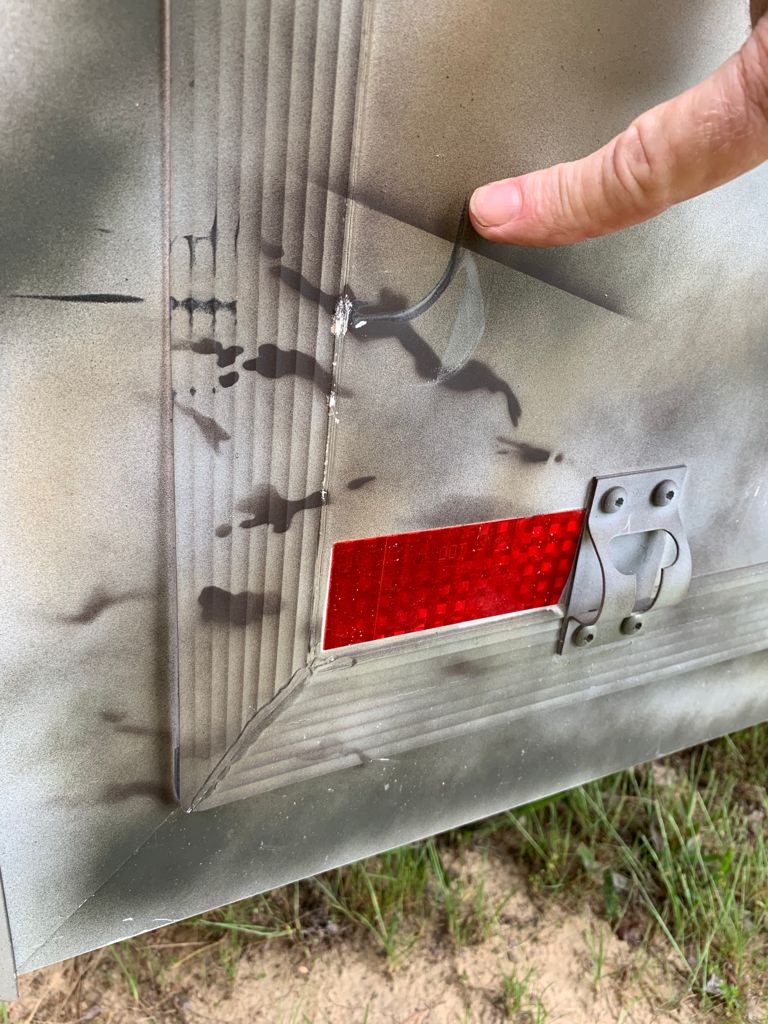 I had dumbly been looking at the center because the damage to her (I mean her mean husband’s) truck was dead center. It was a small dent. Maybe 2 inches square and the door had separated just a bit from the side. Brian said, “Eh, just adds to the camouflage.”

I called her later that night, and told her what Brian said, and that we wouldn’t be filing anything. She said, “Oh thank God! I’m not going to tell my husband about it then.”

I replied, “Yeah, maybe he won’t notice it. If he does, just say, ‘Where did THAT come from?'”

I still feel sorry for her.

Some of you may have noticed that there was no issue of WritersWeekly last week. We tried to get one out. We truly did. But, when Friday night rolled around, while we were still looking for dishes and silverware and towels, and underwear, I realized it just wasn’t going to happen.

Over the weekend, our daughter, son-in-law, and grandbabies came to visit and we had a BLAST with them! 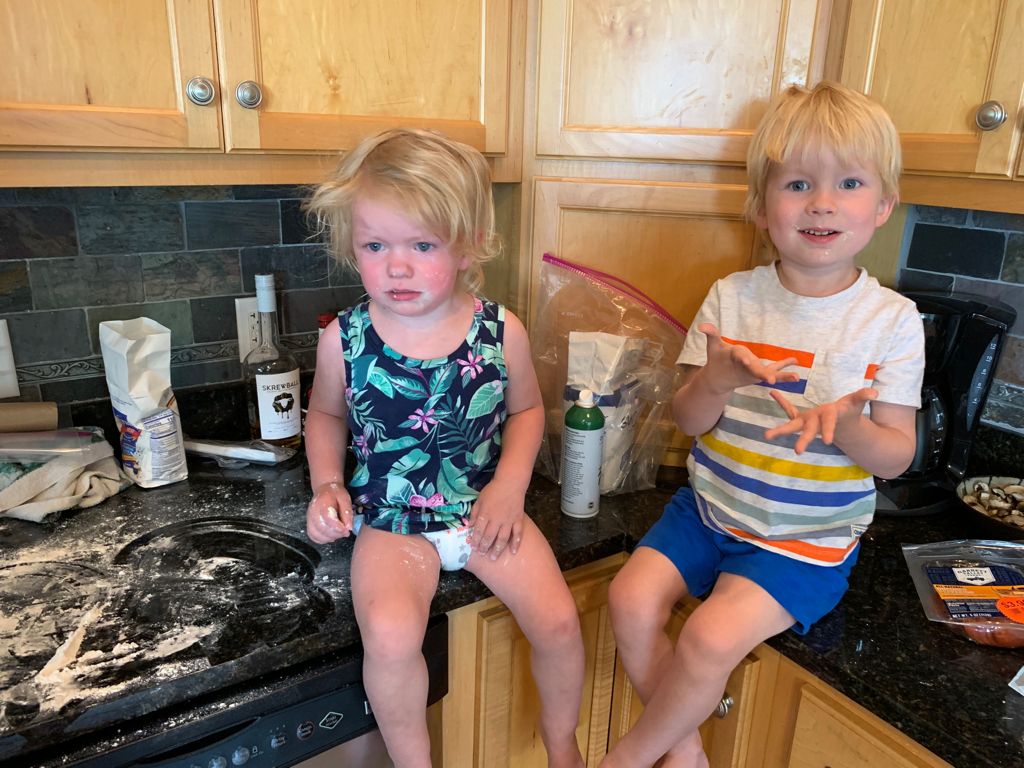 As you can see from this picture, somebody woke up on the wrong side of the air mattress that day!! We don’t have any guest room furniture yet. They were helping their mommy make us all homemade pizza!! 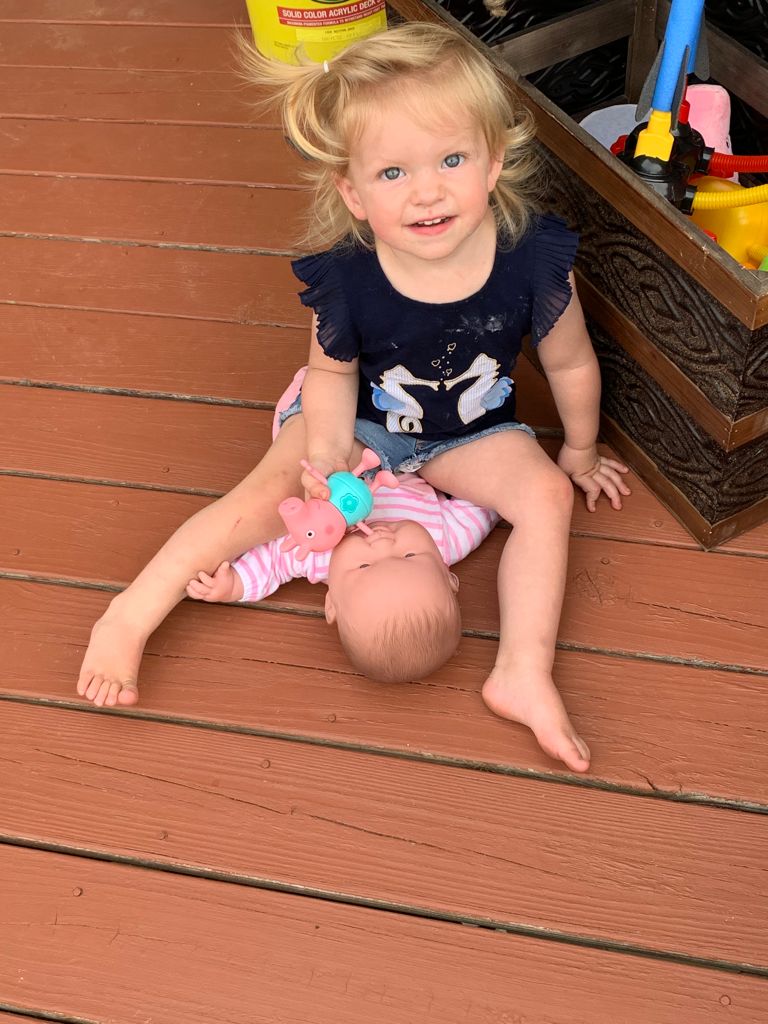 As you can see in THIS picture, Mackenzie figured out a way to solve the age-old problem of how to get your baby to sit still for a feeding… 😉

I’ll share more news next week. Gotta get back to those boxes!!

The Working Parent's Guide To Homeschooling

Dissatisfaction with public and private schools continues to grow, and with more and more acceptance of homeschoolers at colleges and universities, now is the time to encourage all those who are ready and willing, that they are able and qualified to teach their children, even and especially if they must continue working. The Working Parent’s Guide to Homeschooling answers questions such as, “How can I work and homeschool?” by showing the reader how to find what works for them.

7 Responses to "Rear-Ended by Leadfoot Leona in Alabama!"

Print FriendlyPer last week’s issue of WritersWeekly, when Angela found the unique carrot, what did she suggest to the pastor? ***Please answer the trivia question using our contact form HERE. Do not post your answer in the comments section below.  You must be a WritersWeekly.com subscriber to participate in the weekly contests. Subscribe today. It’s free! NOTE: ONLY ONE WINNER PER HOUSEHOLD PER CALENDAR QUARTER, PLEASE. THIS WEEK’S PRIZE: A free print or ebook of your choice from Booklocker.com!           END_OF_DOCUMENT_TOKEN_TO_BE_REPLACED