Positive And, Unfortunately, Negative Thoughts On My Very First Cruise… 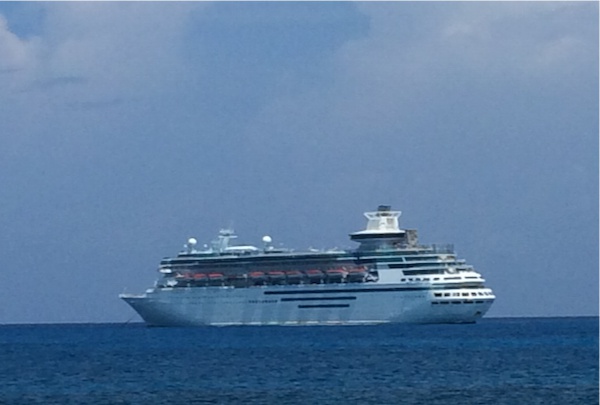 Last weekend, the girls and I drove down to Miami, hopped on Majesty of the Seas, and headed for the Bahamas. This was my first cruise. I don’t like touristy things when traveling and I don’t like being stuck in one place with limited options on what I can do. A friend told me I wouldn’t mind being “stuck” on a boat that size because it’s a floating city.

We arrived back on Monday afternoon and, after telling Richard and the boys of our adventures, I crawled into bed and slept like a rock for several hours. Despite the yucky Nassau excursion, we had an awesome weekend! And, I would go on another cruise…as long as it isn’t stopping in Nassau and as long as it has an excellent reputation for food.

Below are some photos from our cruise. Ali and I had a lot of fun playing slots and blackjack! At one point, Ali and I got separated. I found her…rocking out on the poolside dance floor. So much fun!! The fake “Village People” were awesome! It was so cute when the shirtless, sweaty ones went down and danced with grandmothers. The ship. Very old and soon to be retired. The interior looked like it dated back to the 70’s. When we stepped on board, we felt we’d stepped back in time. The disco theme that night fit right in! One example of a “gelatinous” dessert. This one had what I call a “poop smear” as well. Why do restaurants do that with chocolate syrup? Yucko!! 😉

6 Responses to "Positive And, Unfortunately, Negative Thoughts On My Very First Cruise…"

Print FriendlyPer last week’s issue of WritersWeekly, when Angela found the unique carrot, what did she suggest to the pastor? ***Please answer the trivia question using our contact form HERE. Do not post your answer in the comments section below.  You must be a WritersWeekly.com subscriber to participate in the weekly contests. Subscribe today. It’s free! NOTE: ONLY ONE WINNER PER HOUSEHOLD PER CALENDAR QUARTER, PLEASE. THIS WEEK’S PRIZE: A free print or ebook of your choice from Booklocker.com!           END_OF_DOCUMENT_TOKEN_TO_BE_REPLACED