A VERY Intelligent Wasp Sends Me to Urgent Care 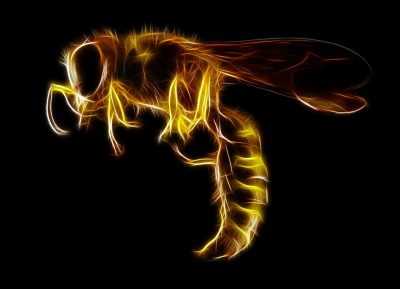 When I was in 7th grade, I was standing on a 7-meter diving platform, trying to get up the courage to jump. A bunch of kids were behind me, telling me to go ahead, daring me, calling me names, etc. You know. We’ve all experienced something similar. I had just decided I was going to be a chicken (and proud of it), and climb back down the steps (which was forbidden), when I suddenly felt fire erupt on the outside of my upper left arm. And, I did what any normal person would do. I ran and I JUMPED!!! All the kids whooped and hollered at my courage!! Nobody knew I’d been stung…

Once I was out of the pool, I ran over to my dad, holding my arm. He ripped apart a cigarette (an unfiltered Camel!), put wet tobacco on my arm, and watched it quickly blow up like a balloon. When it was all said and done, my upper arm was grotesquely large. Horror movie stuff. I don’t remember what happened after that but I spent the next couple of decades terrified that I was allergic to bees…even though I never saw what stung me on that fateful day.

When we lived in Maine, I naturally freaked out when I got stung by a bumble bee one day but I had no reaction. So, I’d spent all those years being terrified of bees for no reason. Now, my fear of winged creatures with stingers is back with a vengeance!

It was just five weeks ago that I was sitting at the local Urgent Care, when I blew out my ribs coughing. And, this past Tuesday, I was sitting there once again. This trip was not illness-related. But, I’m getting ahead of myself.

On Sunday morning, I was carrying a bowl of veggie and fruit trimmings to the compost bucket out on the porch. The bucket, when full, is taken to the compost pile out back. I opened the bucket, dumped the goodies inside, stood up, and noticed a wasp was buzzing my left cheek.

Now, I know better than to swat, or cuss, or to even look at those monsters funny because they WILL find a reason to plant their backside deep into your epidermis. He stayed there, buzzing near my face. He wasn’t trying to sting me. I think he was just curious. I even thought perhaps we were making a connection. Isn’t that sweet?

So, I gently said, “Oh, hey buddy! I’m not going to hurt…..” And, that’s then the entire neighborhood, perhaps the entire city, heard my blood curdling scream.

Brian yelled from the kitchen, “What happened?!”

“That wasp tricked me!! We were having a moment and then his mean friend flew up my dress and STUNG MY FOOT!! He diverted my attention so his friend could fly UP MY DRESS!! Owww!! It burns!!!!!”

As I was screaming like a girl while explaining what happened, I was racing to the bathroom. I hiked up my dress, plopped my foot under the faucet, and turned on the cold water all the way. Brian went digging for the After Bite. After a minute, I turned off the faucet, dried my leg, and let Brian paint the After Bite all over the top of my foot, where a lovely read welt was forming. He then got me a bag of ice.

The wasp had actually had the gall to follow me inside! Brian found it and, soon, we had some fresh new bug guts on our fly swatter. I checked out the culprit, and looked him up. It was a paper wasp.

“While paper wasps can be dangerous and aggressive, they generally do not attack unless they or their nests are bothered. … Wasps can sting repeatedly; causing pain, swelling and whole-body effects that can trigger allergic reactions that may result in death.”
– arrowexterminators.com

GAH!! And, guess what? They’re “semi-social creatures,” which tells me that there definitely WAS some tag teaming going on when I was attacked!!

It actually didn’t hurt for long. Seriously. Thirty minutes tops. I was all good after that.

Until the next day. Almost the entire top of my foot was hot and red, and it HURT. An aching hurt deep down like a bad bruise. In the back of my mind, I remembered that fateful day, in 7th grade, when all the kids thought I was sooooo brave by running across the 7-meter platform, and jumping pell-mell into the soothing water. Was I allergic to wasps???

The red part on my foot looked kinda like the shape of Africa (no kidding) and Brian wanted to make sure it wasn’t still growing so he drew a line around it with a Sharpie. 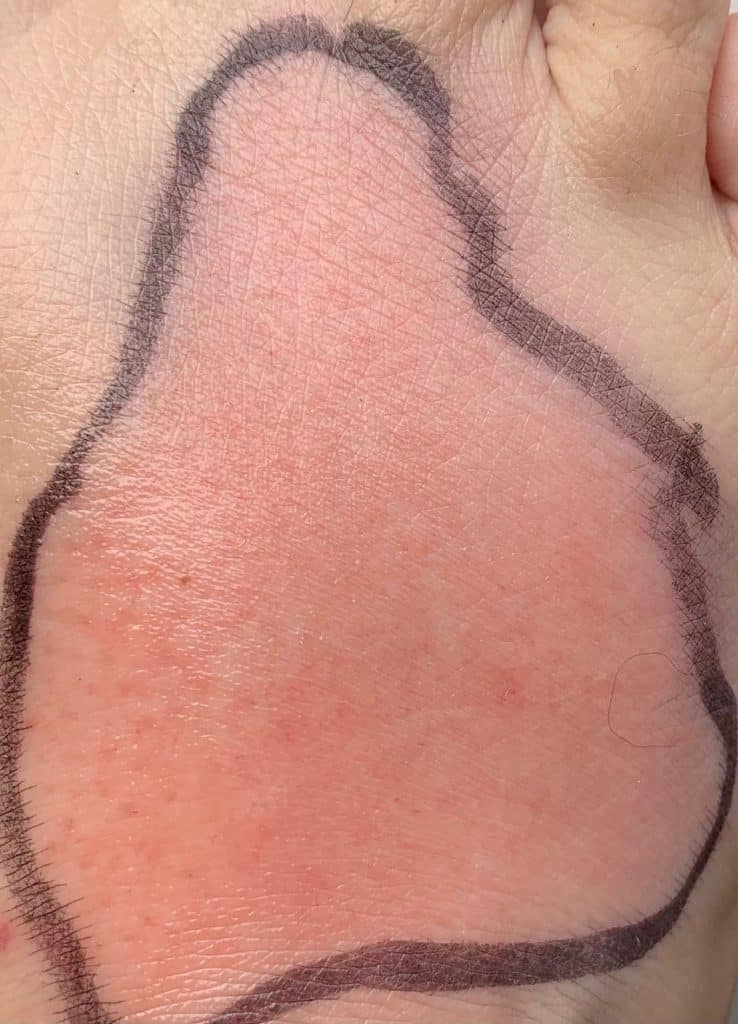 The rest of the day, it hurt and itched LIKE CRAZY, and the red spot got bigger. And BIGGER. I clawed and clawed and clawed. I actually managed to scratch all of the Sharpie marks off my foot. No cream was working and I was going INSANE. That night, I seriously fantasized about slowly slicing off the top of my foot with a serrated knife. In the back of my mind, I knew I needed medical attention. But, people in white coats still scare the cr*p out of me!

It was so swollen that, when I walked, I could feel the pad of fluid on top of my foot going blump, blump, blump. Ewwww!!!

Still hoping for a miracle, I decided to give it one more day. The next morning, Brian drew another line around the red parts. I told him the previous line was giving me anxiety so he made a nicer line, and made it into a heart instead of Africa. The redness extended outside of the heart but we’d still know if it was spreading.

At noon, we had to take Mason to his film making class, and take Max shopping for some snake boots. No, not snake SKIN boots. Boots to protect him from the timber rattlers that are here. By the time we got to Bass Pro Shops, my foot was swelling up again. It was all lumpy and gross, and the red part had extended onto and between my toes, and up to my ankle. I waived the white flag. I had to go see the dreaded, terrifying white coats. 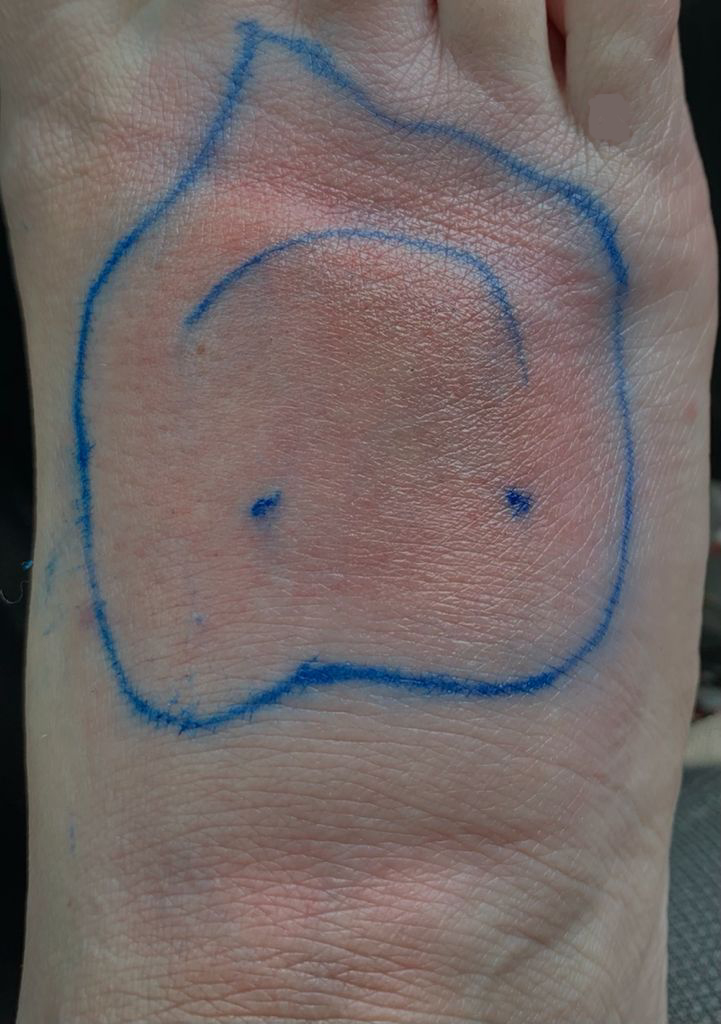 The guys took me to Urgent Care, dropped me off, and went to run more errands (since they didn’t want to sit inside a waiting room with a bunch of sick people).

I sure am glad I already had Covid because eight people walked in right behind me. I was there for about an hour and a half. When I finally got into a room, the Nurse Practitioner took a look, and and said, “We need to give you a shot RIGHT AWAY!”

As I continued to scrape my fingernails deeply and repeatedly over my entire foot, I responded, “Sure! A shot. A serrated knife. Whatever you can grab is fine. But please do it really fast because I AM GOING INSANE!” She gave me a funny look, and continued, telling me this didn’t mean I’m allergic to wasps. My body just doesn’t like them. And, paper wasps are particularly nasty.

I wanted to yell, “Stop talking and FIX IT!” She must have read my mind. She left to write me two prescriptions (steroid pills and some steroid cream) and her cohort, the nurse, arrived, brandishing her shiny, pointed weapon.

I rolled up my sleeve, slapped my arm, and said, “Go ahead. Shoot me!”

She replied, “Bend over.”

It took another two days of INTENSE itching but the swelling slowly went down and the redness has faded considerably. The shot did the trick. I never had to take the pills, though I’m glad we have them on hand for the next time this happens.

One of the contractors working on building out Mason’s room said he thinks we have a nest of them on the back of the house somewhere. As I was typing this, Max (age 19), came in here, and said, “Mom! I got stung!” After baking soda, ice, and After Bite, he’s resting comfortably and I’m keeping an eye on him.

The exterminator will be here on Monday morning.

Print FriendlyPer last week’s issue of WritersWeekly, when Angela found the unique carrot, what did she suggest to the pastor? ***Please answer the trivia question using our contact form HERE. Do not post your answer in the comments section below.  You must be a WritersWeekly.com subscriber to participate in the weekly contests. Subscribe today. It’s free! NOTE: ONLY ONE WINNER PER HOUSEHOLD PER CALENDAR QUARTER, PLEASE. THIS WEEK’S PRIZE: A free print or ebook of your choice from Booklocker.com!           END_OF_DOCUMENT_TOKEN_TO_BE_REPLACED