When Living on a Boat, Hurricane Season Has an ENTIRELY Different Meaning 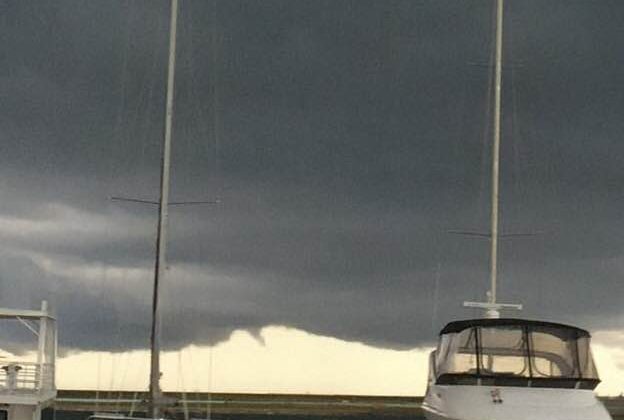 It’s a good thing we got our leaky hose fixed (the one that tried to sink us!) last week because we’re staring down the barrel of a developing tropical system that’s supposed to bring us some pretty hairy weather from tomorrow morning through Tuesday night. The governor has asked the Florida Fish and Wildlife Conservation Commission to prepare the state’s high water vehicles and other flood response resources. While a very high tide for an extended period of time is a concern for liveaboards, we’re not terribly worried about flooding from rain…except for the vehicles in the marina parking lot.

After surviving Hurricane Irma last year, we’re pretty confident we’ll be just fine over the weekend so we’re staying on the boat. No Tan Lines does just fine with anything under a Category 3. And, tropical storms are EXCITING! We experienced a surprise one last year that came out of nowhere and hit us within hours of the warning being issued. That was a FUN day!!

We had a big blow come through last week that was a squall from a low pressure system in the gulf. Black clouds gathered on the horizon, and rushed west toward our location. The wind was blowing at 30 and gusting to 50. I just happened to look off in them distance, and  noticed this cute little pointy thing: It dissipated so quickly that I was lucky to get the photo. It never touched down in the bay.

Max and Mason are super excited about the rough weather that’s coming our way. I’m so happy that we raised them to be tragedy vultures! Richard is just happy he doesn’t have to fill up gas and water tanks for this one.

One Response to "When Living on a Boat, Hurricane Season Has an ENTIRELY Different Meaning"

Print FriendlyPer last week’s issue of WritersWeekly, what stops criminals from writing about and, thus, profiting from their crimes? ***Please answer the trivia question using our contact form HERE. Do not post the answer in the comments section below.  You must be a WritersWeekly.com subscriber to participate in the weekly contests. Subscribe today. It’s free! NOTE: ONLY ONE WINNER PER HOUSEHOLD PER CALENDAR QUARTER, PLEASE. THIS WEEK’S PRIZE: A free print or ebook of your choice from Booklocker.com!           END_OF_DOCUMENT_TOKEN_TO_BE_REPLACED