Grammie Sue Was a HIT at Church! 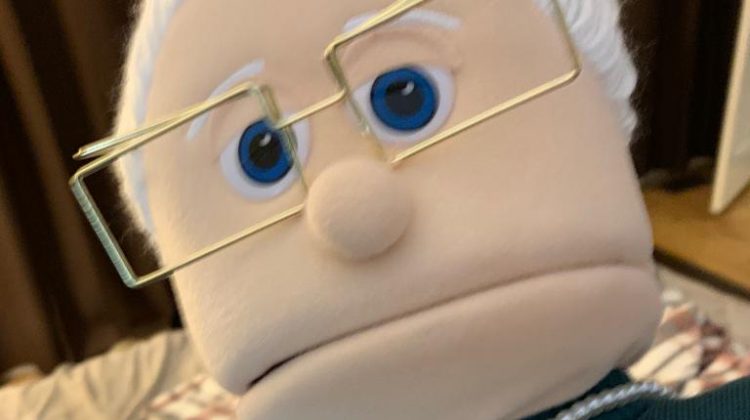 We were recently asked to participate in the church’s annual Variety Show. Of course, we welcomed the challenge. The only stipulation was that our act had to be funny. Other than that, the sky was the limit. We could literally do anything we wanted! Well, it had to be church-friendly, of course.

We heard what the other acts were going to be so we put our thinking caps on to come up with something unique for the “audience.” On a whim (I had NO idea why I did it!), with no experience whatsoever, I ordered a ventriloquist puppet. 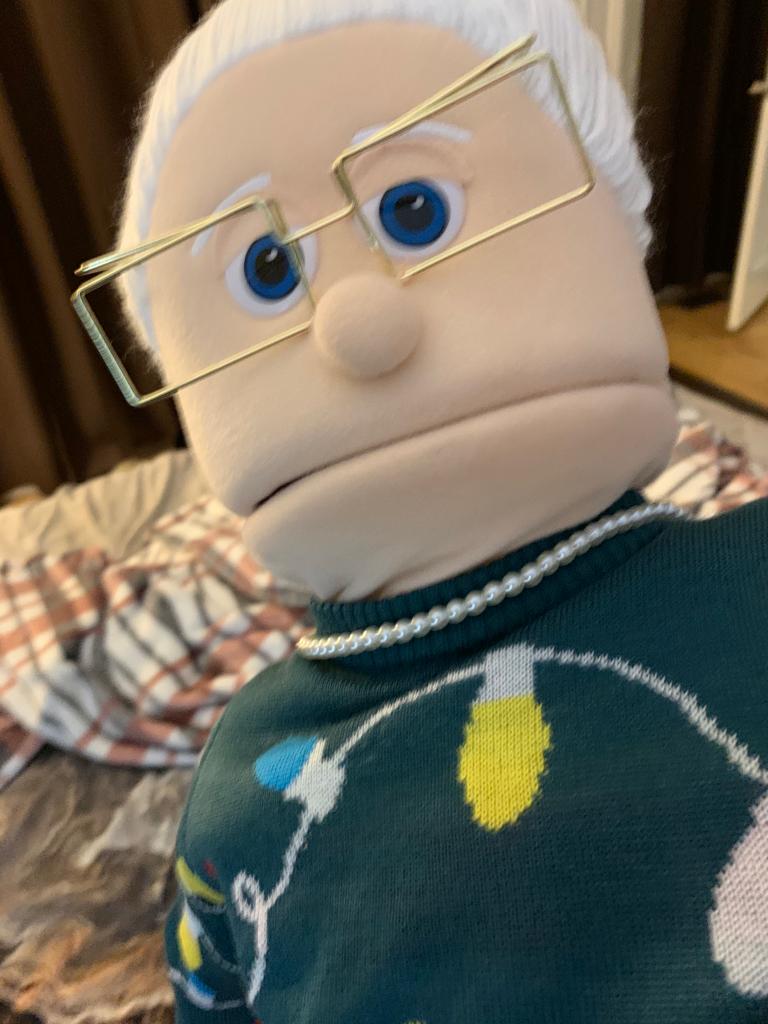 She arrived a couple of days later. Brian promptly named her Grammie Sue, which is perfect. And, literally two hours before we left for church, we came up with our “act.” Brian, Grammie Sue, and I would be “on stage” together. That took a lot of pressure off of me. Brian could banter with her when there were dead spots in the dialogue (or, Heaven forbid, a joke that might bomb).

Grammie Sue arrived at church in an ugly Christmas sweater, and with a Band-aid on her forehead. She was very cagey about her injury, and refused to discuss it with anyone.

She had quite a bit of attitude, and spent a lot of time poking fun at our pastor, who actually laughed so hard at one point that he stood up from the pew he was in, turned to everyone, and swore (well…promised) he was NOT the pastor who got pulled over with a bottle of water in his vehicle…that Jesus had suddenly turned into wine.

After several more off-color church jokes, Brian had to cut Grammie Sue off. She was getting a bit out of hand. I asked Brian to hold Grammie Sue while I reached for my guitar. She was very surprised. She didn’t know what song we were going to sing. She yelled at Brian for sticking his hand up her dress. He accidentally flipped her backwards and she yelled about everyone being able to see her underwear. The congregation was roaring!!

When I finally got my guitar settled, we started singing. Of COURSE, the song was Grandma Got Run Over by a Reindeer. Grammie sue started to frown and then she started shake. She was soooo mad and it was hilarious!! She interrupted the song, and demanded to know who told us that she’d been run over, etc. Of course, we told her the pastor did. He’s quite the church gossip!

She then insisted on finishing the song to tell “her side of the story.” And, this is how it went, with her high-pitched, screeching (extremely annoying!) voice:

When you found me Christmas morning
At the scene of the attack
There were hoofmarks on my forehead (she pointed to the bandage)
An incriminating claw marks on my back.

It wouldn’t be Christmas without Gramma
Who’d make your meals and cinnamon snacks?
And just because I’m in a wheelchair
Doesn’t mean you get to take my presents back!

Now we’re all so proud of Grandpa
He’s doing all of the chores now
Now get your Grammie some more eggnog
Add a big ole splash of rum, I’ll show you how!

We had to quickly put Grammie Sue back in her suitcase after that! Shwew! Good news is we have not only NOT been kicked out of church…but Grammie Sue has been invited back for an encore performance!

After the Variety Show ended, a nice lady walked up to me, and quietly said, “My grandson died two weeks ago. I haven’t smiled since then but you made me laugh!” And, then she started crying and then I started crying. I knew right at that moment that God had led me to buy the puppet.

A man asked Brian, “I didn’t know Angie was a ventriloquist!”

Brian replied, “Neither did I!”

At one point during the act, Brian asked Grammie Sue, “How do you do that?”

She screeched, “Do what?”

He replied, “Speak without opening your mouth.”

A three-year-old girl wanted to know if she could have a conversation with Grammie Sue during the luncheon afterward so I pulled her out of her suitcase. Oh my goodness, the smile on that little angel’s face!

It was a truly magical night.

Happy happy happy 2022 to all of our awesome readers!! We’re all home with Covid. Yes, again. It hit us all in a 24-hour period, between Monday and Tuesday. We’re doing fine. It’s not NEARLY as bad as the first time we had it. We had groceries delivered (they were left on the front porch) and we won’t be leaving the house for at least the next two weeks.

And, after the whirlwind December we’ve had, it will be a very welcome rest. 🙂

2 Responses to "Grammie Sue Was a HIT at Church!"

Print FriendlyPer last week’s issue of WritersWeekly, what was the 5th most-read link on WritersWeekly in 2021? ***Please answer the trivia question using our contact form HERE. Do not post your answer in the comments section below.  You must be a WritersWeekly.com subscriber to participate in the weekly contests. Subscribe today. It’s free! NOTE: ONLY ONE WINNER PER HOUSEHOLD PER CALENDAR QUARTER, PLEASE. THIS WEEK’S PRIZE: A free print or ebook of your choice from Booklocker.com!           END_OF_DOCUMENT_TOKEN_TO_BE_REPLACED