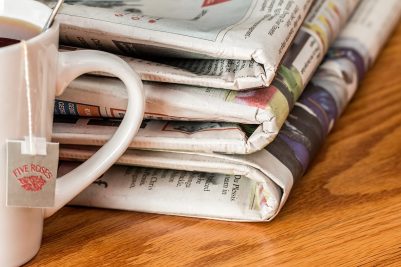 Is anyone really surprised?
New York Times accused of ‘shilling for communist China’ with glowing piece about freedoms amid coronavirus
“The New York Times was roasted on Monday evening for publishing a glowing story about China that was quickly labeled ‘propaganda’ by critics, as many readers pointed out that the liberal newspaper doesn’t seem to mind pro-communist features but an op-ed by a Republican lawmaker caused chaos inside the newsroom.”

Pretty soon, the only “media” available will be social media and bloggers
US Newsrooms Lost a Record 16,160 Jobs in 2020, Study Finds
“Newsroom layoffs reached a record high in 2020, growing nearly 200% compared to the previous year, according to a new study from the global outplacement firm Challenger, Gray & Christmas.”

“The press is the public’s surrogates!”
Lawsuit to allow media access to Alamance County District Court cases dismissed
“’It doesn’t shock me, it’s sort of a way of side-stepping a delicate issue,’ said Mark Prak, a Raleigh based media lawyer who has represented the Times-News in the past. “We’re in a pandemic and if there’s judicial proceedings, there’s got to be a way for the public to see them, and the press is the public’s surrogates in most cases.”

Under the current law, if “publishers” (websites) edit users’ posts, they ARE liable. However, they are free to allow some posts on a topic while deleting others.
The 1996 Law That Ruined the Internet
“When the law was enacted in 1996, the possibility that monopolies could emerge on the internet seemed ludicrous. But the facts have changed…”

When you insert your own statements into someone else’s controversy, you become legally liable if your statements were wrong.
Twitter Sued By Owner Of Repair Shop Who Claimed To Work On Hunter Biden Laptop
“When the story was published, Twitter locked the Post‘s account, saying that it violated its policy on the distribution of hacked material.”

Woman find herself the object of elaborate fictional narrative/video posted online.
Libel, Caution: Smeared Online, a Woman Fights Back
“After some negotiation, Lang agreed to turn himself in and told them about his friends He Yuan and Tao Li, who had helped create the fake chat logs and put everything together to share online, respectively.”

Print FriendlyPer the 6/24/22 issue of WritersWeekly, quote one of the complaints about AuthorHouse. ***Please answer the trivia question using our contact form HERE. Do not post your answer in the comments section below.  You must be a WritersWeekly.com subscriber to participate in the weekly contests. Subscribe today. It’s free! NOTE: ONLY ONE WINNER PER HOUSEHOLD PER CALENDAR QUARTER, PLEASE. THIS WEEK’S PRIZE: A free print or ebook of your choice from Booklocker.com!           END_OF_DOCUMENT_TOKEN_TO_BE_REPLACED