PRESS PASS: Why You Want It and How to Get It! by Joyce Frohn 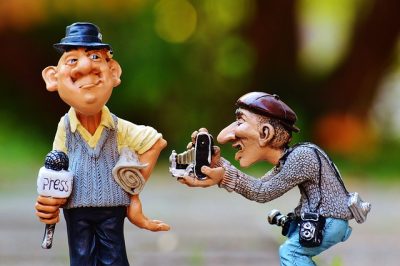 The Press Pass. It’s a little plastic tag…and so much more!

Properly termed, they are professional credentials. They are passes that get the media (yes, even freelance writers are considered media) into events, and close to important people. We writers never pay for them. All major events have them, from science fiction conventions, to airplane conventions, to political press conferences. The first time I got a press pass, I was barely out of college, writing for magazines so obscure that no one had heard of them. But, for one week, I was hanging out with pros that had been working for decades at an event where the tickets were $40 for 1 day. And, I attended all week – for free.

Not only did I get in, I got fed, got the opportunity to talk to and meet people I never would have had a chance to otherwise, and left the convention with armloads of swag…as well as sore feet, an overloaded e-mail box, and ten dozen donuts.

How can you most easily obtain a press pass?

It’s simple! Ask an editor. But, first, you need to land the writing assignment.

Look around your area, and figure out what local event you would like to cover. I start working in January for an event in July. Some places have a limited number of press passes and others have cut off dates.

Also, the sooner you get your credentials, the better the perks, which may include free parking, and free “gifts.”

Go to the event website, and start looking. There will be a place called “media room,” “Media access,” or some similar term. It may even be called “Press Passes.” There will be instructions on how to get a press pass, and who qualifies. If you can’t find the instructions, look for an e-mail address for media relations, and ask. For EAA AirVenture (where my press pass adventures began), I needed to have an editor of a magazine or website fill out an online form with my name and address, their name, and the name of the magazine (all the usual stuff), along with the name of the article(s) they wanted me to write. Many places require there to be standards that those sites or magazines must meet, like a minimum circulation or viewership.

Once you find an event you’re interested in, it’s time to land that writing assignment!

This is no different than sending out regular query letters for articles. Just start the usual way, by selling your article (coverage of something at the event, or the entire event itself), and yourself. What information can you get there that isn’t available online? What new, secret thing will be unveiled? What might happen there? Any convention has some things, events, or people that you can’t easily get access to any other way.

Then, tell your editor that you will get better access for your article if you have a press pass. Tell them that you checked the guidelines and they are eligible. Remind them that a press pass is free. They just need to fill out the application, and submit your name as their writer. Sometimes, the hardest thing is getting a relatively new editor to believe that they are a real editor, that their publication is eligible, and that they can get a press pass for you.

Don’t be afraid to be rejected; that’s part of the industry. Sooner or later, you may find yourself covering industry events for good money, travel expenses, and free gifts.

Joyce Frohn has been a writer since she first used crayons. She was first published for pay in a tribute to Ambrose Bierce in the 1980’s. She has been published in “ClarkesWorld”, “Writer’s Digest” and “GRIT”, among many other places. She is married with a teen-aged daughter. She has two cats, a lizard and a Patreon account and they’re all hungry.

Print FriendlyPer last week’s issue of WritersWeekly, what was the 5th most-read link on WritersWeekly in 2021? ***Please answer the trivia question using our contact form HERE. Do not post your answer in the comments section below.  You must be a WritersWeekly.com subscriber to participate in the weekly contests. Subscribe today. It’s free! NOTE: ONLY ONE WINNER PER HOUSEHOLD PER CALENDAR QUARTER, PLEASE. THIS WEEK’S PRIZE: A free print or ebook of your choice from Booklocker.com!           END_OF_DOCUMENT_TOKEN_TO_BE_REPLACED