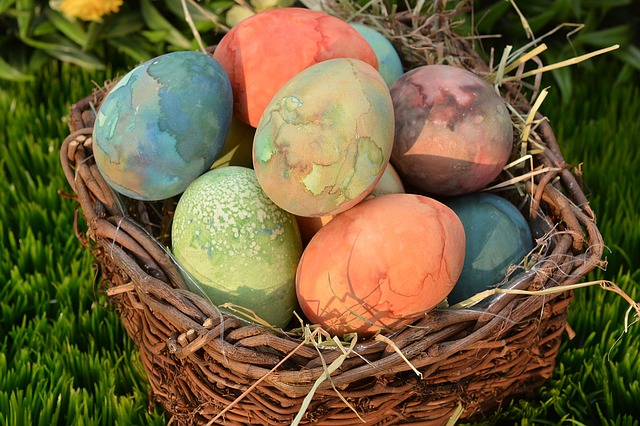 We don’t have an empty nest but it’s emptier than it used to be. This will be the first Easter ever where Zach will not be here. He has to work that day and he will only be able to have brunch with his fiance and her parents on his lunch break.

Frank, Ali and Justin all have to work that day so they won’t be arriving until after 6:00 p.m. Of course, Matt and his wife are in Boston. So, on Easter morning, it will just be Richard and I with Max and Mason.

Richard was going to be put in charge of Easter dinner but he’s so busy right now that he did something he’s never done before. He ordered Easter dinner from The Fresh Market and he’ll be picking that up on Saturday. Sssshhh! Don’t tell anyone!!! 😉

After the morning egg hunt and the opening of the baskets, I have to work until dinner that day. Things are usually pretty busy this time of year and right now is no exception.

Happy Easter to All!

Print FriendlyAccording to last week’s issue of WritersWeekly, who should every author hire?? ***Please answer the trivia question using our contact form HERE. Do not post the answer in the comments section below.  You must be a WritersWeekly.com subscriber to participate in the weekly contests. Subscribe today. It’s free! NOTE: ONLY ONE WINNER PER HOUSEHOLD PER CALENDAR QUARTER, PLEASE. THIS WEEK’S PRIZE: A free print or ebook of your choice from Booklocker.com!           END_OF_DOCUMENT_TOKEN_TO_BE_REPLACED