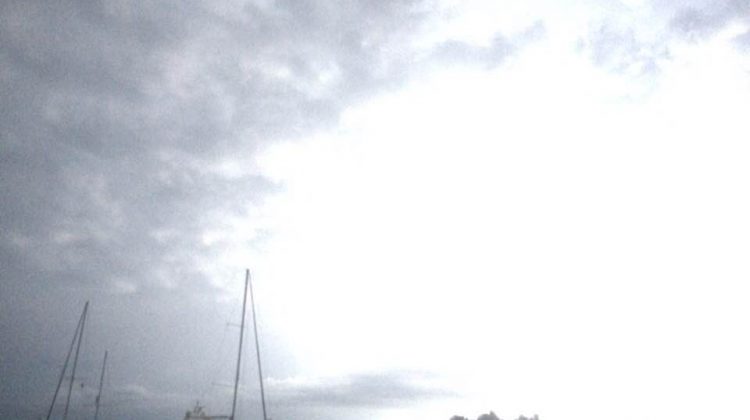 When your floating home pitches several degrees at 4:00 a.m., and you almost fall out of bed, you’re instantly wide awake. That was our Monday morning alarm clock! I sat up, and asked Richard, “What was…?!” Before I had time to finish, a huge clap of thunder and lightning hit simultaneously. No Tan Lines was pitching wildly! I jumped up, and, with the floor rising and falling, stumbled toward the salon to unplug all the electronics. The rain started then, lashing down on the deck above our heads. The sound was deafening inside the boat.

I weaved and pitched like a drunkard back to the our bedroom where Richard was checking the weather. The worst hadn’t yet begun. This is what we saw: 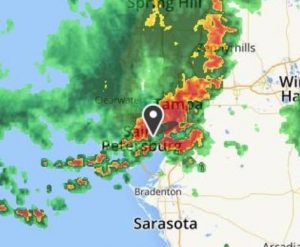 I figured Mason must be scared to death so I once again embarked on the carnival ride through the salon to check on him. He was splayed out in his bunk, snoring loudly, obvious to the face that his bunk was going up two feet, down two feet, up two feet, etc. That kid can sleep through anything!

Still wearing my nightgown, I opened the companionway, and stepped out into the sideways rain. I needed to check our lines to make sure were weren’t rubbing the dock. We weren’t. The wind was blowing us the other way. Except for the constant lightning flashes, it was completely dark and pretty creepy outside. If a waterspout or tornado was barreling down on us, we’d never see it.

I came back inside, dried off, and decided to go ahead and get dressed in case we needed to abandon ship. I didn’t want to have to do that in a nightgown. Since I was already wide awake, I also did my hair and makeup, which isn’t easy when you’re stumbling front to back, and side to side, while trying to stand still. My eyeliner didn’t look great when I was finished but I didn’t think anybody would notice.

Then, all we could do was wait it out, listening for the sound of a freight train, or trying to gauge the heeling of the boat to see if her lines were breaking. None of that happened. The storm went on for quite awhile. I got on my phone, and flipped through some facebook posts. Then, I read some news headlines. Boring stuff. Sometimes I read history articles online so I did that for awhile to entertain myself.

Rambo, who hates storms, was curled up next to me, CATatonic after his stressful pre-storm period of crying. 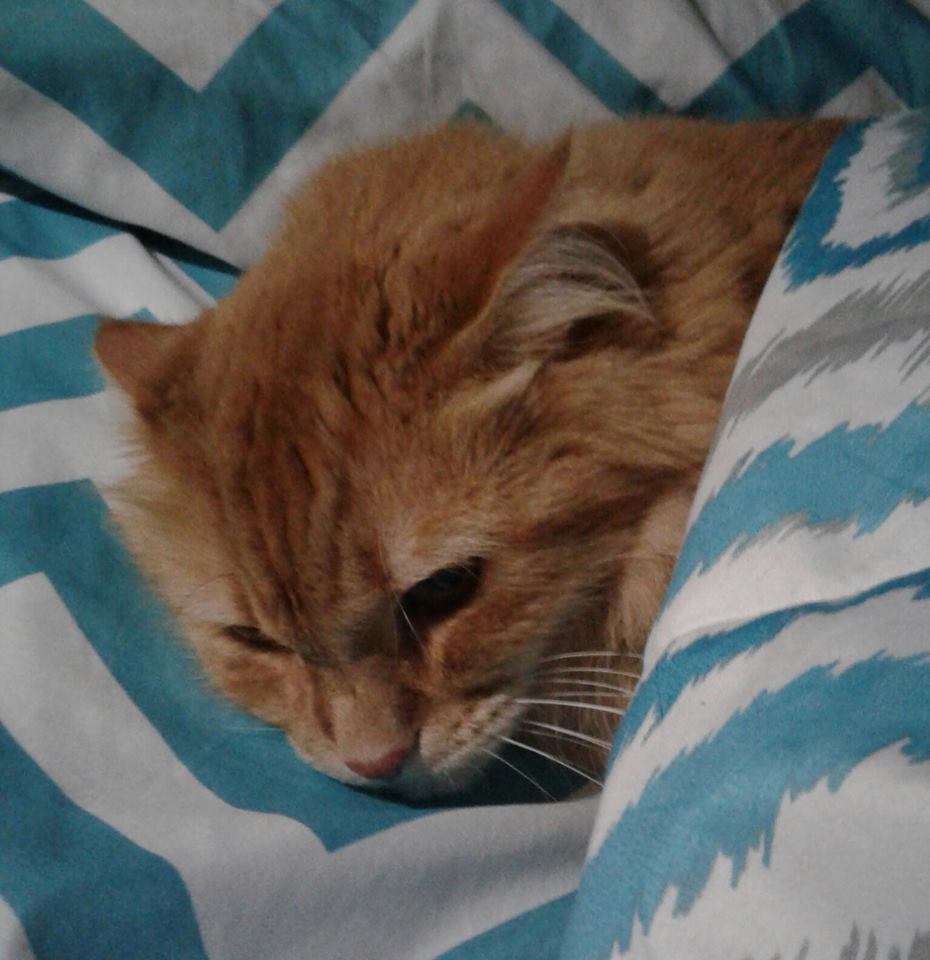 Eventually, things started to calm down, thank goodness. After the bulk of the storm passed to the southeast, I noticed that the port on our starboard side was flashing repeatedly from lightning strikes in the distance. It looked like a welder was working right outside. Since I was already wide awake and dressed, I decided to go outside to see if I could get some good lightning shots. This is what I got. Remember, all of these were taken before sunrise. 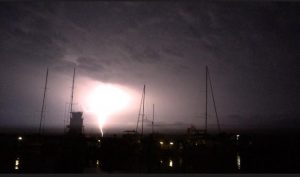 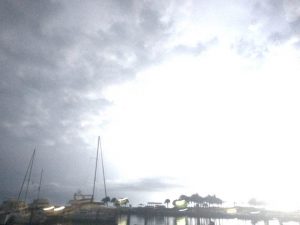 Not a nuclear bomb. Just a CLOSE STRIKE! 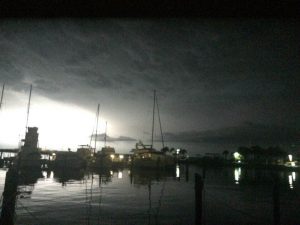 Despite it being grainy, this was my favorite shot. The lightning behind the clouds makes the bay appear foggy and the cloud on the right looks like a mountain range in the distance. 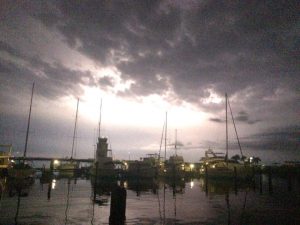 Looks like sunrise but it was pitch black outside. 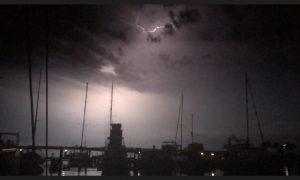 The storm has passed to the southeast so it was difficult to catch actual bolts of lightning. I did manage to get a couple. 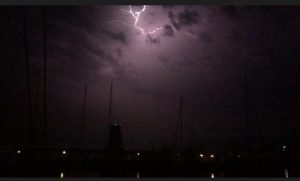 As I’m writing this today, we are having wave after wave of squalls coming over. There’s lots of thunder and lightning, wind, and rain, and we’re having a blast! Why? Because it’s daytime and we can actually SEE if a waterspout or tornado is nearby!

Print FriendlyPer last week’s issue of WritersWeekly, when Angela found the unique carrot, what did she suggest to the pastor? ***Please answer the trivia question using our contact form HERE. Do not post your answer in the comments section below.  You must be a WritersWeekly.com subscriber to participate in the weekly contests. Subscribe today. It’s free! NOTE: ONLY ONE WINNER PER HOUSEHOLD PER CALENDAR QUARTER, PLEASE. THIS WEEK’S PRIZE: A free print or ebook of your choice from Booklocker.com!           END_OF_DOCUMENT_TOKEN_TO_BE_REPLACED