Ack! Has Anybody Seen Toto?!?! Cool Storm Pics from the “Home Office!!” 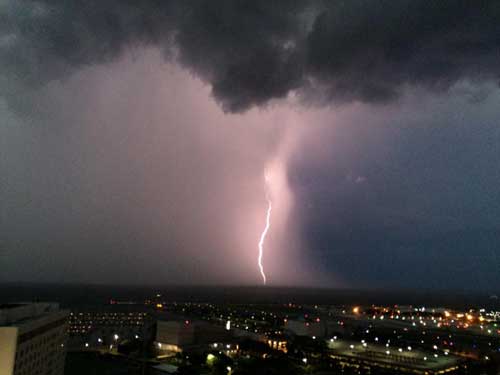 We’ve been crazy busy here at WritersWeekly and BookLocker. Usually, July and August are our slowest months of the year. But, it appears authors are finally starting to catch on to the shenanigans of our largest competitors (i.e. AuthorHouse, Xlibris, iUniverse, Trafford, and other firms owned by Author Solutions because we have been SLAMMED with business!

We recently needed to hire another employee. Our new Operations Manager is Brian Whiddon. (Mary, who was previously in that position, is now Manager of Business Development.)

Brian is an excellent writer, editor, and manager. He’s also a former police officer and Army veteran who teaches firearms and self-defense training on the side. As most of you know, due to our activism work on WritersWeekly Whispers and Warnings, we and our children have been threatened by scammers we’ve exposed in the industry in the past. One guy threatened to kidnap our children from their schools, and hire someone to come to our house to “take care of us.” A female publisher who was also a bodybuilder threatened to beat me up. She later went to prison. We’ve received several other threats over the years as well.  Oh and don’t miss this THIS NUT-CASE, who sent numerous profane and offensive emails to me, and threatened to destroy my reputation. (Warning – That page contains a LOT of profanity and very racist statements.) So, while Brian works “from home” in his sailboat, he also comes into the “home office” frequently. We feel extremely safe having a guy like Brian on the team – especially now that we’re living and working in the “big city!”

If you live in the greater Tampa/St. Petersburg/Sarasota area, and need firearms and/or self defense training, or if you’re looking for an NRA-certified instructor who can help you get your carry and conceal license, let Brian know by contacting him at YinAndBang.com.

Best of all, Brian lives on a beautiful sailboat (yes, he really does!) only three blocks away so we get unlimited sailboat rides! Yea!! You can read more about Brian’s painful initiation (ha ha) into the publishing industry in my article THIS WEEK.

On Monday night, while we were all working here on the 18th floor of the new “home office,” a huge storm was brewing over Tampa Bay. When lightning started in the distance, we all unplugged our laptops, and stepped out onto the balcony. The clouds were rolling over each other. We’d never seen a sky the likes of this! If any of you know what type of clouds these are, please post a note in the comments section below. 🙂 After half an hour of being mesmerized by the power of God next to some of our neighbors (many folks were out on their balconies staring at the ominous sky), we decided to watch the rest of the show from the roof. And, boy were we glad we did because that’s where we saw this: Before we left the roof, we looked west. The front of the storm was racing away, toward the Gulf of Mexico. To the left, you can see a tiny smidgen of the fading sunset.

It’s now officially the rainy season here so we’re excited to get more evening shows like this one!

I replied, “Somebody who’s really loud and rowdy.”

First Week in St. Pete? A Car Accident AND a Tropical Storm! Whoop!

Is Coco Afraid of Spring Storms?

News From the Home Office Archives

Print FriendlyAccording to last week’s issue of WritersWeekly, before you can determine if your book is going to be successful, what do you have to define?? ***Please answer the trivia question using our contact form HERE. Do not post the answer in the comments section below.  You must be a WritersWeekly.com subscriber to participate in the weekly contests. Subscribe today. It’s free! NOTE: ONLY ONE WINNER PER HOUSEHOLD PER CALENDAR QUARTER, PLEASE. THIS WEEK’S PRIZE: A free print or ebook of your choice from Booklocker.com!         END_OF_DOCUMENT_TOKEN_TO_BE_REPLACED