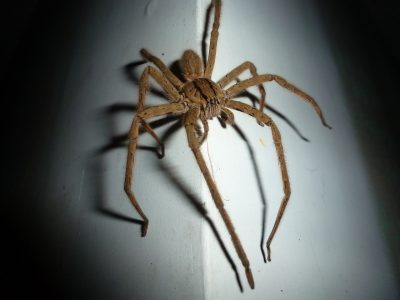 We had an adventure on Sunday with a creepy crawly. We were at the gas station and Max, Mason and I were waiting while Richard was pumping gas. Max suddenly shrieked, “Tarantula!”

I frantically looked around as I simultaneously yelled back, “Where?!”

He screeched, “Right there!!”

The little bugger then scuttled across the ceiling toward the driver’s seat and I still didn’t see it. Richard had walked to the driver’s door by this time, looked up, and said, “OH, GEEZ!”

Still shaking my head and darting my eyes back and forth, I yelled again, “Where?! WHERE IS IT?!”

He pointed up and I leaned over, and saw a huge spider the size of my fist. Do you remember the scene from National Lampoon’s Family Vacation when they realize Aunt Edna is dead in the back seat and they stop the car, and all fly out the doors? That’s what Max and I did at that second. Unfortunately, Mason (age 5) was stuck, locked in his car seat.

I raced around to the driver’s side of the truck, saying, “Don’t touch it! I want a picture!!”

I put my phone up to take a picture and the huge, meaty critter instantly moved, scuttling toward the back seat across the ceiling of the truck. It was heading right for Mason and he showed us what strong lungs he has by screeching at the top of them!

Max dove in, unbuckled Mason, and dragged him out the door. Richard opened the back door and we took apart the back seat looking for the monster…but we never found it. It either got out when Richard opened the door…or it’s still in there (shudder!). After about 20 minutes of searching, we reluctantly got back into the truck and went on our way, looking all over the interior of the truck over and over again for the rest of the afternoon. Richard had the heebie-jeebies after that and, every few minutes, he’d scratch himself here or there. That was pretty funny.

It was a wolf spider (harmless), not a tarantula, but it was the biggest spider we’ve ever seen! If you stepped on something like that, it would ruin your shoe!

We proceeded with our sightseeing tour and, boy oh boy, did we see some sites! In the next three hours, we saw a wild dolphin swimming right near swimmers on Venice Beach, two people in handcuffs (at two different locations), and a forest fire that had just been started by a lightning bolt we’d seen shoot out of a storm in front of us.

It was quite an eventful day!! 🙂

This week’s Masonism: “Does soda make my hair grow?”

Hugs to all,
Angela