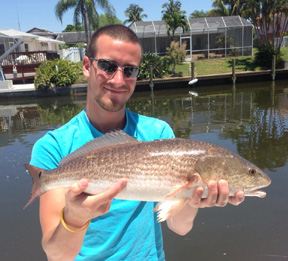 WHERE WE LEFT OFF ON PART II…

I had found a nice rental house in Port Charlotte, Florida where we could stay for a year while we tried to figure out where we wanted to live. Frank had just graduated from high school. The out of state tuition for the first year in Florida was painful but necessary. One weekend, we were in Georgia visiting Justin’s family, and we received a phone call from Frank, who had stayed home to attend classes and take care of the pets. He was out of breath and I was immediately concerned. He said, “Mom, I’ve been in a wreck. I’m on a dirt road. I don’t know where I am…”

Of course, by this time, I thought he had a head injury (why didn’t he know where he was?!) and when I’d told him to hang up, I’d severed any lifeline he had with anyone who could at least remotely help him. I pictured him walking through the Florida woods, getting bitten by snakes, followed by alligators, and eventually fainting on the pine needle floor. Yeah, pretty dramatic but it all went through my head because I’M A MOM and THAT’S WHAT I DO!!!

Frank was fine. You can read the story HERE.

And, he continues, to this day, to be a risk-taker – I’d left my candy apple red (used) Mustang convertible at the house for Frank to use while we took our truck to Georgia. Not my finest parenting moment. The story is a bit sketchy but, due to the fact that Frank was on a gravel road in my sports car, we suspected he was doing what some young men do – testing for speed and maneuverability.

Our daughter and her fiance had been in a very bad head-on collision a few months prior to our move. This new accident really set me on edge and I started worrying. Had we made the right decision moving to Florida where there’s more traffic? And, more crime?

Things settled down once again. The business was thriving. I can tell you that being able to go swimming in the back yard on our lunch hour was HEAVEN. I purchased an entire Beach Boys album just for our lunch time dunks. Weekends were spent exploring the state together as a family.

Ali and Justin quickly found great jobs on Anna Maria Island. We drove there several times. Everybody liked it and we all decided the Bradenton area would be a great place to live. Well, except for Zach. He was living his dream – in a very nice apartment in Punta Gorda located directly on a golf course. He’d quickly made numerous friends and he wasn’t interested in leaving his new piece of paradise for Bradenton. But, he would only be about an hour away.

Bradenton, conveniently located between Tampa and Sarasota, was near several colleges so Frank, who’s planning to become a physician, had his choice of schools to attend. The town was also close to beaches and both Bradenton and Sarasota host numerous cultural events and activities each year. We had more restaurants to choose from than we’d ever dreamed about in Maine and the absolute best part was the kids could play outside 12 months out of the year. In Maine, they were stuck inside for several months at a time during the brutal winters.

I was spending every evening on real estate websites, trying to find just the right house at just the right price. Ever since my early 20’s, I’ve always lived on the water. And, it’s always been moving water. Not lakes or ponds. They must be bays or rivers. I feel connected to the rest of the world when I live near moving water. I feel isolated and disconnected when I’m not near water. Unfortunately, homes on the water in Florida were FAR more expensive than the ones in Maine.

I also wanted the house to be very open and airy. Our house in Maine had tiny rooms with wood floors. It was lovely and cozy and we filled it with antiques. But, now I wanted whites and blues with large rooms. I wanted to be able to walk in the front door, and be able to see all the way through to the back of the house. I also wanted vaulted ceilings. No more claustrophia!

We looked at a few houses but it was discouraging. For a few weeks, we entertained the idea of building a house in a new waterfront community. But, the homeowner’s association fees were $700 per month (humongous gulp!!) and they could change those fees at any time. Since we knew retirement was only about three decades away, and since we didn’t want to move ever again, we had to get it just right. And, paying homeowner’s association fees like that would most certainly drive us to bankruptcy during retirement.

One evening, I was once again searching homes for sale and I accidentally typed in two bedrooms instead of three. A house popped right up on top. Two bedrooms and a den. Since Frank would be moving out soon, that would work! I didn’t like the shell yard but that could be fixed. The interior appeared open and airy, just like I wanted. And, it was on a saltwater canal, right around the corner from Sarasota Bay.

We quickly made an appointment to see it. And, when we walked in the front door, I knew this was the house I wanted to live the rest of my life in, and die in. It was absolutely perfect!! The price was a bit higher than we wanted to pay but it was at the bottom of the market and we knew the value would rise.

We met the owners. The assured us the house was in fine shape. They said they’d never had termites. The husband was a roofer and he put the roof on himself. The wife told me it was in excellent condition, that it never leaked. They said the air conditioner was only about five years old. They said a lot of things…that we later learned were outright lies. It passed general inspection, roof inspection, and termite inspection (and we later suspected they were all in cahoots with each other to ensure a sale). We had to walk away at one point because they wouldn’t negotiate on the price but they came back again, very much wanting to sell. We bought it, and we LOVED IT! Only a couple of days after we moved in, a summer storm hit, and it started raining INSIDE the living room, in several places. We also later discovered significant termite damage, our new electrician found hot wires buried all over the yard (and a Folger’s coffee can used as a junction box – also buried in the yard) and, when the air conditioner started giving us trouble, none of the technicians could figure out the age of the unit because somebody had conveniently removed the tag with the serial number…

PART I – The Romantic History of WritersWeekly and BookLocker

PART II – The Romantic History of WritersWeekly and BookLocker

PART IV – The Romantic History of WritersWeekly and BookLocker

Why You Should Publish Your Print and Ebook Editions AT THE SAME TIME!

Print FriendlyPer the 6/24/22 issue of WritersWeekly, quote one of the complaints about AuthorHouse. ***Please answer the trivia question using our contact form HERE. Do not post your answer in the comments section below.  You must be a WritersWeekly.com subscriber to participate in the weekly contests. Subscribe today. It’s free! NOTE: ONLY ONE WINNER PER HOUSEHOLD PER CALENDAR QUARTER, PLEASE. THIS WEEK’S PRIZE: A free print or ebook of your choice from Booklocker.com!           END_OF_DOCUMENT_TOKEN_TO_BE_REPLACED