Minor Surgery Aboard “No Tan Lines” During Tropical Storm Alberto! 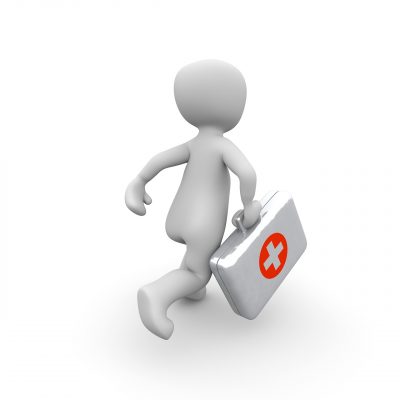 A few weeks ago, when we were talking about the impending hurricane season, I said, “Last year we got slammed with storms and had a major hurricane. Statistically speaking, what are the chances we’ll get another one this year?” Unfortunately, I forgot to knock on teak.

After Hurricane Irma last year, we knew this one would be a piece of cake. But, still, we readied the boat and ourselves for yet another live-aboard adventure. We had plenty of water and food – enough to last us for 10 days. Our standard provisions include milk, bread, eggs, juice, proteins, fruits, and veggies, popcorn, raspberry chocolate chip ice cream (2 of those!), and chocolate chip cookie dough, of course. While the storm wasn’t expected to hit us dead on, we were going to get tropical storm force winds, storm surge, and flooding rains. We have a satellite office downtown that’s on the second floor of a building but that’s no fun at all so we opted to remain on board “No Tan Lines” throughout the course of the storm.

Of course, we have a first aid kit in case of minor emergencies but you always hope nothing will happen during a storm. Buuuuuut, Murphy’s Law always seems to find its way into our lives.

That night, we were just about to go to bed. The wind was kicking up and Tanny was bouncing all over the place. And, it was raining again as another squall came through. It was late but it wasn’t a school night so the boys were still up. And, that’s when Mason came into the aft stateroom (our small bedroom).

He showed me. Yeah, it was a LOT of blood. An alarming amount.

“Well, it was bothering me so I started messing with it and it just started bleeding and it wouldn’t stop.”

I grabbed a flashlight for a closer look. The source of the bleed was kind of hidden under the layers of flesh. I couldn’t stop the bleeding without being able to put pressure on the source. I told him I’d need pull part of it away to get to the bleed.

Remaining outwardly calm, I gently said, “Max, get me some paper towels. Richard, hold this flashlight.”

Max brought the paper towels and I tore off a small piece, and very quickly did what I had to do. Mason yelped.

Then I shoved another piece of paper towel against the wound and the bleeding slowed down very quickly. It worked! I silently congratulated myself for watching all those episodes of Grey’s Anatomy.

Mason sat there glaring at me, holding the paper towel in place.

I smiled back at him, held up what I’d just torn from my own child’s body, and said, “Do you think the tooth fairy comes during tropical storms?”

How to Reborn a Doll in a Day

Angela Hoy's istructional guide to creating your own reborn doll!

Create your very own adorable reborn baby
in only one day, or craft a cherished keepsake as a gift
for a special child or grandchild!

Learn how to create your own realistic bundle of joy or how to start crafting reborns for profit! Angela Hoy's book will get you started!

2 Responses to "Minor Surgery Aboard “No Tan Lines” During Tropical Storm Alberto!"

Print FriendlyAccording to last week’s issue of WritersWeekly, what percentage of consumers in 2020 claimed they’d like to see more video content from brands? ***Please answer the trivia question using our contact form HERE. Do not post your answer in the comments section below.  You must be a WritersWeekly.com subscriber to participate in the weekly contests. Subscribe today. It’s free! NOTE: ONLY ONE WINNER PER HOUSEHOLD PER CALENDAR QUARTER, PLEASE. THIS WEEK’S PRIZE: A free print or ebook of your choice from Booklocker.com!           END_OF_DOCUMENT_TOKEN_TO_BE_REPLACED