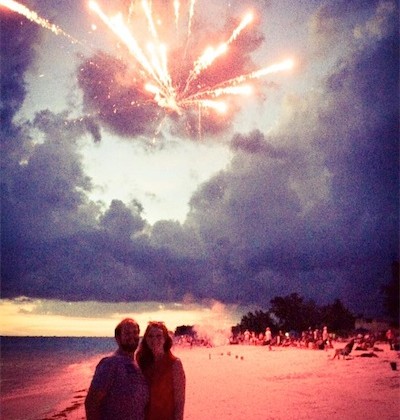 We had a great Fourth of July! Since there are no public bathrooms at our favorite beach, I always stop drinking water (and everything else) at least two hours before we leave to see the fireworks. Mason wanted to drink some juice before we left. I told him that was okay but, if he really needed to potty at the beach, he could simply get in the water, sit down, and potty. Nobody would notice, right? Mason said that sounded okay with him.

It wasn’t quite dark yet when we arrived. Of course, Mason immediately said, “I have to potty.” So, I pointed to the water.

A few seconds later, I looked up, and was horrified to see Mason pottying…while standing UP at the water’s edge! I had one of two choices. Run up to him, and draw attention to the situation or…roll my eyes and pretend he wasn’t my kid. I chose the latter. Ali, of course, whipped out her cell phone and took a picture. Don’t worry. He wasn’t facing her or the crowd. When he ran back to us, we all just played dumb.

I know people post way too many fireworks pictures online but this one came out very unusual and pretty because of the clouds so I wanted to share it with you. That’s our daughter, Ali, and her fiance, Justin. This was the first Independence Day that Justin was able to get off work early enough to see the unusual fireworks display on the island. Poor Frank and Chelce had to work. Zach and Mary were in Sarasota on top of a waterfront building watching several fireworks displays at the same time.

About an hour into our fireworks gazing, lightning and thunder struck almost simultaneously. The whole crowd (thousands!) roared with delight and clapped for God’s show! I told the kids and Richard it was time to go just as the first huge rain pellets hit. I turned around to clean up the used sparklers and, when I turned back around toward the beach, it was almost completely empty! People were racing for protection from the lightning. Another nearby lightning strike with instantaneous thunder got us moving faster, too.

Just past the beach, there was a condo complex with open patios. I could see people inside one of them. I didn’t care. I told Richard, Max and Mason to stand there on the patio, protected from the lightning (I hoped!), and a nice lady came outside and invited them in. Wasn’t that sweet?! I grabbed both umbrellas, and took off running the two blocks to the car. Ali and Justin were already hoofing it and I caught up with them, passing off one of the umbrellas. By the time we got to the car, there was already high water on the road. We were soaked to the skin and we were laughing so hard! It was awesome!!

I drove back and picked up Richard and the boys. We all came back to the house, put on dry clothes, and sat down to eat more BBQ pork sandwiches and potato salad, which were left over from the afternoon. We had a WONDERFUL DAY!!!

After I told Richard it was okay to park in that no parking zone for just a few moments while we ran into a local bathroom, Mason said, “Dad, you might get arrested if you do that…so don’t listen to Mom!”

Archived News From the Home Office is HERE.

Print FriendlyAccording to last week’s issue of WritersWeekly, what percentage of consumers in 2020 claimed they’d like to see more video content from brands? ***Please answer the trivia question using our contact form HERE. Do not post your answer in the comments section below.  You must be a WritersWeekly.com subscriber to participate in the weekly contests. Subscribe today. It’s free! NOTE: ONLY ONE WINNER PER HOUSEHOLD PER CALENDAR QUARTER, PLEASE. THIS WEEK’S PRIZE: A free print or ebook of your choice from Booklocker.com!           END_OF_DOCUMENT_TOKEN_TO_BE_REPLACED