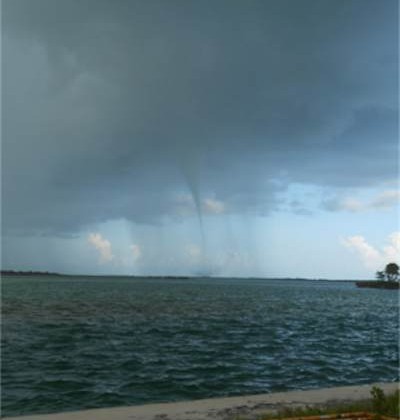 We had a humdinger of a storm last weekend. We were first alerted when the news flashed a warning that there was a waterspout offshore and that the front of the storm would arrive in exactly 17 minutes. After chuckling about our first waterspout, we put made sure everything was secure outside and then I put helmets on Max and Mason and gave one to Frank (age 19) in case he needed one, too. Laugh all you want but I keep their bike helmets handy after reading THIS STORY. Anyway, I dashed outside and took a picture just before the storm hit. The waterspout dissipated before the storm hit us but we were still pummeled with sideways rain, thunder and back-to-back lightning strikes. It poured and poured and poured! Mason was excited when I took the picture above but, when the storm actually hit, he was pretty scared. I walked all around the house after the deluge began, saying, “If this roof leaks, we’re definitely going to find out right now!” I didn’t find any leaks, not even in the garage. What a relief!

I went back to my computer (which was unplugged, of course) and, just as I sat down, Max said, “Uh, Mom, you know how you said the roof wasn’t leaking? Well, the ceiling is.” I raced to the living room and, sure enough, there was now a steady drip drip drip where there had been none a minute before. Max’s cat, Rambo, was standing by, moving his head up and down, up and down, watching the drips. As the storm progressed, so did the drip. It moved sideways along one of the rafters and, half an hour later, another place in the same room was also leaking. Ug!! The exposed beams are painted in that room and, now that we know what the leaks look like between the exposed knots in the wood, it’s pretty obvious that the room has leaked many times in many places in the past. That was confirmed when a roofer came by on Sunday to give us an emergency repair. He said whoever had fixed the roof previously had done so many times and that it was clearly an “amateur” job. The previous owner claimed he was a retired roofer. We guess he wasn’t a very good one!

We have obtained two quotes for a new roof and we’re going to get two more since the first two are $7K apart. The first quote was from the same company that inspected this roof (and passed it) before we moved in. The house also passed the general inspection AND the owners claimed the roof had never leaked. They lied – big time. We’re not yet sure what recourse we have, if any. I have a call into our realtor.

The good news is it hasn’t rained since the emergency patch. The bad news is the rainy season starts this week.

We were at a noisy restaurant and somebody’s phone rang. Of course, we all reached for our phones but it wasn’t any of ours. It belonged to the middle-aged woman sitting right behind Mason. Over the noisy din, he yelled, “It’s that old lady’s phone!”

Big hugs to all,
Angela

Print FriendlyPer last week’s issue of WritersWeekly, when Angela found the unique carrot, what did she suggest to the pastor? ***Please answer the trivia question using our contact form HERE. Do not post your answer in the comments section below.  You must be a WritersWeekly.com subscriber to participate in the weekly contests. Subscribe today. It’s free! NOTE: ONLY ONE WINNER PER HOUSEHOLD PER CALENDAR QUARTER, PLEASE. THIS WEEK’S PRIZE: A free print or ebook of your choice from Booklocker.com!           END_OF_DOCUMENT_TOKEN_TO_BE_REPLACED