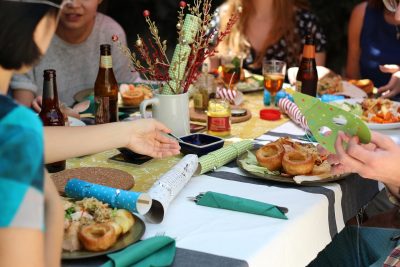 Just like you and every other author on this planet, I have my successes and failures. In the end, perseverance continues to pay off. My first great success was a story, a food story, actually, about how to make a good, healthy pizza. I submitted it to Recipes Only Magazine (no longer publishing, unfortunately). The story caught the editor’s eye and, though she didn’t give me an outright acceptance, she walked me through the paces of crafting my story to fit her magazine. I’ve lost track of the number of re-writes the editor insisted on, but I finally produced the piece that she was looking for. It was published in the Feb/Mar 1988 issue of Recipes Only Magazine. This success was the beginning of a long relationship with Recipes Only Magazine and the added honor of being included (and paid additionally) in the 1989 Recipes Only Magazine Cookbook.

I learned a lot from that initial exercise, not just in how to write a good food story and how to present a recipe that anyone could follow. For the next fifteen years, I wrote more food stories for different magazines, Home Cooking, Back Home, to name but a few. I ventured away from writing food stories, still honing the skills that I had learned from the editor of Recipes Only Magazine. I am now a regular (paid) contributor to decodedarts.com, decodedpast.com and The Curious Tourist Guide. I have published seventeen books, two of which won awards, and two others that included recipes to carry the story along.

Diagnosed with multiple food allergies about four years ago, I collected revised recipes, and put them together into a collection that I had published last year. Still Delicious is a cookbook that not only addresses multiple food allergies, it also explains how serious these allergies are and how prevalent some of the allergens are in today’s food industry. Plus, of course, there are the recipes, designed to avoid these allergens and to create a tasty food experience.

My advice to any would-be writer is don’t give up. If I had taken to heart the lengthy (and rather frightening) first letter from Recipes Only Magazine, the one that started out very negatively with “I don’t see a long feature piece about pizza in Recipes Only,” and if I hadn’t taken all of the criticism handed out in letter after letter demanding re-writes, I don’t think I would now be able to boast of all of my writing credentials. We all have it in us to write. The only difference between a wanna-be writer and a writer is that the wanna-be just talks about it; the writer writes. Start with what you know and keep on writing.

Many of Emily-Jane’s stories and novels reflect her national pride. She loves writing about Canada and the extra-ordinary Canadians who have made Canada a great nation. Emily-Jane’s stories have appeared in History Magazine, Canadian Stories Magazine, and Western People. She has written several fiction and non-fiction books: Spring, Summer, Autumn, Winter, Ukulele Yukon, Letters From Inside, The Creative Spirit, It Happened in Canada (Books 1, 2, and 3), Personal Notes, The Whistling Bishop, Songs of the Voyageurs, F-Stop: A Life in Pictures and Amazingly Extra-Ordinary Women. An award-winning author, she was named a Finalist for the 2009 Next Generation Indie Book Awards with her book, The Whistling Bishop, and again in Finalist in the 2012 Next Generation Indie Book Awards with her book, F-Stop: A Life in Pictures. With a passion for food, Emily-Jane started her writing career as a food writer for Recipes Only Magazine. She continued to write about food, culminating in her recent cookbook, Still Delicious, a book that addresses multiple food allergies.

Emily-Jane has a Masters degree in Canadian Studies from Carleton University, and a strong academic background in Canadian music and art history. She has taught piano (Royal Conservatory of Music) to hundreds of students over the course of thirty years as well as creative writing to students of all ages. The Creative Spirit, It Happened in Canada (Books 1, 2, and 3) all have valuable teacher’s guides, and are tools which are used to teach history at the elementary and high school levels. Emily-Jane is passionate about communicating our vibrant Canadian history and the achievements of exceptional Canadians and exceptional women to both students and adults. She is a sought after speaker who often draws upon her stories about extra-ordinary Canadians and extra-ordinary people around the world, particularly women.

Print FriendlyPer last week’s issue of WritersWeekly, what is one secret reason a publisher might reject your book? ***Please answer the trivia question using our contact form HERE. Do not post your answer in the comments section below.  You must be a WritersWeekly.com subscriber to participate in the weekly contests. Subscribe today. It’s free! NOTE: ONLY ONE WINNER PER HOUSEHOLD PER CALENDAR QUARTER, PLEASE. THIS WEEK’S PRIZE: A free print or ebook of your choice from Booklocker.com!           END_OF_DOCUMENT_TOKEN_TO_BE_REPLACED