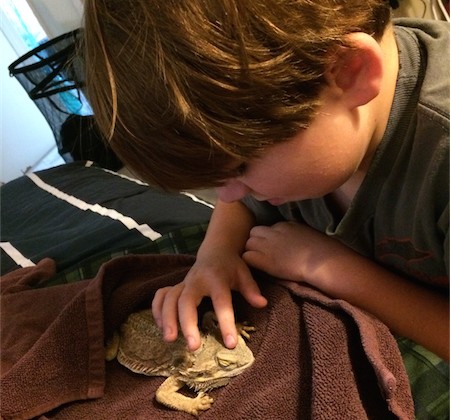 About eight years ago, the boys convinced me to buy them a bearded dragon. Over the years, they have enjoyed his company…and particularly enjoyed scaring the grandmothers with him!

A few days ago, I found him upside down in his cage. He’d fallen off his big branch where he likes to sleep. I told Richard Kool had died and I went to get a towel to wrap him in before I broke the news to the boys. When I picked him up, he was still very much alive. But, he was sick and too weak to turn himself over.

Max was frantically concerned, and gave him a warm bath and a drink. Then, we put him back in his cage and he ate a cricket. Just one. He then laid down where he was. Before bedtime, Max put him back on his branch. The next morning, he was lying below it again, upside down.

I held him on my lap several times a day, and got some water in him, along with five crickets over a period of two days. I was not comfortable force feeding him but he’d die without the nourishment. A couple of times, we couldn’t see him breathing but, upon some prodding, he’d wake up and respond. On Monday, Richard and Max took him to a special vet in Sarasota. She suspected he had anemia or a parasite. She gave him some medicine for parasites and took some blood. She also gave us some protein powder to make into “shakes” for Kool.

When they got back home, he was more animated than he’d been in several days and we had great hope that he’d pull through. He even bit me! He swallowed the syringe of protein drink and went down for a nap. That evening, he wasn’t looking so good. He was very weak and “floppy.” I put him on a heating pad and held him all evening. I thought he was heading for the rainbow bridge.

That night, Max was at his sister’s house for movie night so I put Kool in a box with the heating pad and put him next to our bed so I could check on him frequently. He died early the next morning. Richard and Max took him back to the vet so he could be cremated.

He was a good lizard. Despite the fact that he wasn’t furry, and that he didn’t jump up and down each time we walked in the door, and that he bit me (nobody else) every chance he got, he was a good pet and he definitely had his own cranky personality that we all loved. We will miss him. 🙁 The Fall contest is always our most popular one. If you like crisp, cool fall weather, orange, red and yellow leaves, and/or Halloween, you’re going to LOVE this one!