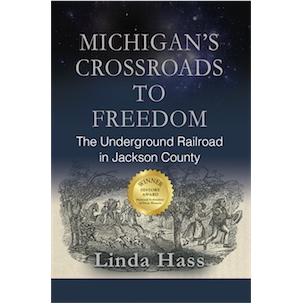 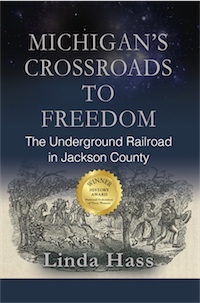 One summer day several years ago, two acquaintances stopped by my house to ask if I would write a story about the Underground Railroad. Their request wasn’t unreasonable. I love American history, and the secret network that transported freedom seekers from slave states in the South to free states in the North and Canada is intriguing.

The details of my friends’ proposal, however, were hazy. Who would publish the story? Who was the audience? Where would I find evidence? They didn’t know but they were sure I could do the legwork for their great idea. I thanked them, and then put the suggestion on the back burner.

But on dark nights, when stars illuminated my imagination, the idea glowed with possibility. Did freedom seekers use those same stars to travel north to my hometown of Jackson, Michigan? Were enslaved Americans lodged and transported by Jacksonians? I had a hunch the answer was “yes.”

Years ago, when conducting research for a master’s thesis, I uncovered evidence about a Jackson journalist who wrote that, as a boy, he often drove his father’s “lumber wagon” with a “load of slaves” hidden in the back. As he said in his memoir, “Many a weary night’s ride fell to my lot, along the new and rough roads . . . to aid these poor fugitive slaves on their way to freedom.” I never followed that lead since it didn’t fit my research focus at that time…but I always wondered where it might take me.

On a whim, I visited a library in south central Michigan, and asked a reference librarian for help investigating Jackson’s role in the clandestine system. “Our staff spent months assisting another researcher looking for the same thing. We found nothing. You’re spinning your wheels,” she said. The gauntlet had been thrown down. Was there really nothing to find?

The hunt was on! I wouldn’t just write a story–I would write a book, or two.

That’s when I began a pursuit that has evolved into a passion. Over the years, the evidence I’ve uncovered has astounded me. For starters, Jackson was the site of a clash between a plantation owner who wanted to retrieve his “property” and local abolitionists who refused to surrender the man. Then there was the anti-slavery editor whose downtown office was firebombed. Another surprising find were very touching love letters between a husband-wife team who hid fugitives in their Concord Township home.

To honor these and many other brave Jacksonians, I wrote two books about their exploits: Michigan’s Crossroads to Freedom: The Underground Railroad in Jackson County, and Hidden in Plain Sight: The Underground Railroad in Jackson County. The first book gives an overview of Jackson’s role in the secret system while the second delves deeper into the personal trials and tribulations of real activists who either lived in Jackson, or passed through it.

Based on my research, I also applied for a Michigan State Historical Marker in Jackson’s Bucky Harris Park, honoring abolitionist activities that occurred there, a State Historical Marker in Mt. Evergreen Cemetery, Jackson, honoring Underground Railroad activists buried there, and a National Park Service designation listing Mt. Evergreen Cemetery in the National Underground Railroad Network to Freedom. All were granted by their respective boards of review.

My adventures continue, from power point presentations to art gallery displays, showcasing Jackson’s role in the Underground Railroad. And while this unconventional pursuit has become quite time-consuming, it’s also yielded wonderful rewards. The men and women I’ve researched illustrate, by example, how it’s possible for one’s moral compass to shift culture. True, their exploits occurred over 150 years ago, but their examples of faith, bravery and racial reconciliation echo through the ages. The light of their message still shines today.

After earning a master’s degree in journalism from Michigan State University, Linda has worked for several publications, specializing in business and history. She’s published two books. When not exploring dusty archives, the Jackson resident and her husband enjoy frying a batch of pan fish after a day on the lake.

Print FriendlyPer last week’s issue of WritersWeekly, what was the 5th most-read link on WritersWeekly in 2021? ***Please answer the trivia question using our contact form HERE. Do not post your answer in the comments section below.  You must be a WritersWeekly.com subscriber to participate in the weekly contests. Subscribe today. It’s free! NOTE: ONLY ONE WINNER PER HOUSEHOLD PER CALENDAR QUARTER, PLEASE. THIS WEEK’S PRIZE: A free print or ebook of your choice from Booklocker.com!           END_OF_DOCUMENT_TOKEN_TO_BE_REPLACED